Despite its recent economic woes, the prevailing self-image in the United States is that it is -- and will remain -- very advanced relative to any and all countries of the tropics. While we have been busy congratulating ourselves and enjoying the fruits of hard work and ingenuity of the past, those traits have been taking hold in places that may surprise many of my North American compatriots. 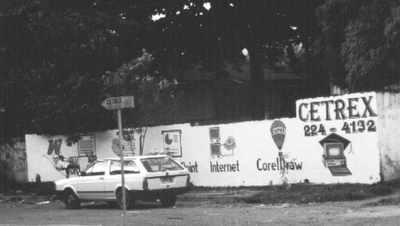 My first visit to Brazil was in 1996, when I spent three months in Rondônia. I was primarily interested in deforestation and had chosen the location of some of the most severe and notorious forest clearing on the planet at the time. Among the many surprises in store for me was the widespread commitment to learning, exemplified most poignantly by this computer school in Porto Velho -- an area considered "unexplored" even by many in Brazil.

The contrasts between perception and reality, in fact, eventually led to the publication of our small book Olhares, which I describe on my Rondônia page and which we hope to update soon.

I have had the good fortune to return to Brazil a half-dozen times, always meeting avid learners -- people pursuing two degrees at the same time, or working full time while also studying English or Spanish, for example. it is no surprise, then, that during my acquaintance with Brazil, it has climbed the ladder of largest economies, from about 12th place then to 6th place today.

Some in the United States who are aware of this growth -- through programs such as Brazil's Rising Star, a 60 Minutes profile of Brazil's immediate past president that I consider required viewing for anyone interested in understanding the future of this hemisphere. But even those who have noted the growth might be surprised at the sophistication exhibited in We Are Embraer:

If you have flown on American Eagle, chances are you have been on aircraft manufactured by this Brazilian company. The last leg of my long return from the Amazon in 1996, in fact, was on just such a plane!

Not only is Embraer competing with U.S. aviation companies, it is moving quickly ahead in some areas of critical importance to the industry. As illustrated in the Clarissa segment of Discovery Channel's Brazil Revealed, aviation is a career path of growing importance for young Brazilians.

Fortunately, opportunities are available and increasing for U.S. students and scholars to study in Brazil or with Brazilians who are studying in the United States. And although a growing number of Brazilian professionals speak English, learning the Portuguese language is an increasingly wise career-development strategy.

I do not wish to romanticize Brazil's achievements. Its economy is growing, education is becoming more widely available, and its income gap -- one of the most severe in the world -- is narrowing. But although Brazil is a leader in many aspects of renewable energy development, its financial strength does remain inordinately dependent on the exploitation of natural resources. Deforestation remains a vital concern both globally and within the country, where the United Nations Rio+20 conference is fostering debate and innovative public art. From my point of view, two decades have seen a growing sophistication in Brazil's environmental movements.
NOTE: Many thanks to my student Andres for the Embraer video and my friend Viviane for the Rio+20 image.

Posted by James Hayes-Bohanan at 12:21 AM