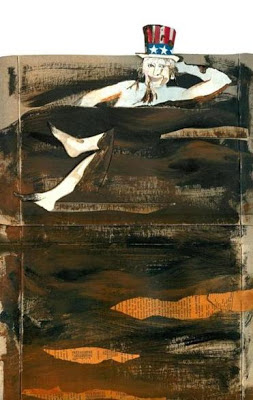 UPDATE: After this was posted, news emerged that Rep. Lamar Smith (R-TX), a career-long recipient of oil-industry funding and a vocal denier of climate science, has been chosen to chair the House Committee on Science, Space, and Technology.

Former Boston City Councilor Tom Keane is one of several writers to conclude -- based on production forecasts from the International Energy Agency -- that the future portends A new world of energy independence. Writing in the Boston Globe last Sunday, he predicts peace and prosperity based on petroleum production, basing his forecast on a linear extrapolation of recent trends that neither can nor should be sustained.

His argument is an illustration of the fallacies that arrive when economics and politics are considered in the absence of geography.

The image to the right accompanied the online version on Keene's article. I do not think it is meant to be a parody, but a smiling Uncle Sam bathing in a pool of petroleum reminds the viewer more of the catastrophes of the Exxon Valdez or Deepwater Horizon than of the prosperity that the oil is meant to make possible.

In the print edition, Keene's article ran alongside Student activism is alive and well, in which Bill McKibben (of 350.org) expresses optimism that the young activists leaders he meets on campuses have both the wisdom and the idealism to brush aside such dangerous, facile approaches as those advocated by an under-regulated petroleum industry. Bold New Plan on Nation of Change describes McKibben's work with universities in more detail.

This week, Adam Greenberg of Milton, Massachusetts is one such young leader who is currently representing youth at the climate meetings in Doha, where his voice is sorely needed. Last year, Abigail Borah of Vermont bravely stood up at a similar meeting in Durban, calling attention of the failure of the official delegation to take seriously the burdens that are being shifted to the shoulders of her generation.

At this writing, I am not sure whether the Globe will run my reply to Keene's article. I sent it Monday morning, and post here in its entirety for the convenience of readers. (Update December 9: The Globe did run the letter, along with another letter about the importance of science in this debate and a photo of an anti-fracking sign)


In his exuberance over reports of growing U.S. petroleum production, Tom Keane has set aside his usually careful approach to complex policy questions (“The energy glut,” December 2). It is true that dependence on production elsewhere has led to dangerous entanglements in oil-producing areas, which in turn have been justified excessive military spending and reckless engagements. Those bells are going to be difficult to unring, however, and just as military contractors did not suffer from the promised the post-Soviet “peace dividend,” so too will a way be found to sustain support for the military-industrial complex in the absence of strategic petroleum interests.

Keane’s analysis also raises but too blithely dismisses very important concerns about the environmental geography of petroleum production. Nothing has changed to discredit peak-oil as a principle. Even if heroic (and dangerous) measures prolong the inevitable decline of production in a region, the decline will come, and as it does, increased costs will push us toward alternatives. Hydraulic fracturing (fracking) simply means that even more disruption of the carbon cycle will take place in the mean time, with costly and deadly consequences for everyone.

Fracking is affordable only if the costs of contamination and dwindling water supplies are borne by water users in producing areas. The optimistic production forecasts are based on straight-line extrapolation from recent production increases, which occurred in a well-financed regulatory vacuum.

It is strange that Keane cites unspecified regulations as an obvious remedy to the catastrophic environmental costs of fracking, and mentions the risks taken with BP’s offshore production as evidence. The failure of evidence in the Deepwater Horizon case should make us worry more about fracking, not less.

Additional resources are on my recent Fracking Hell post and my Inconvenient Geography page, as well as Fracking Our Food from The Nation. 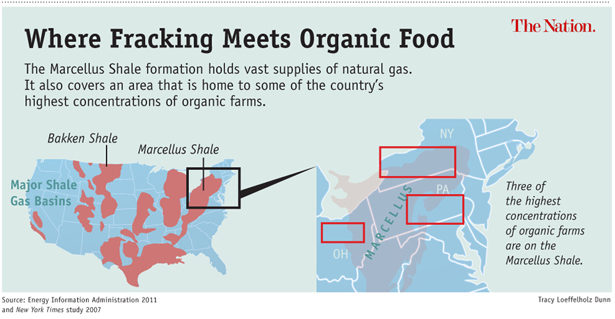 Posted by James Hayes-Bohanan at 2:00 PM