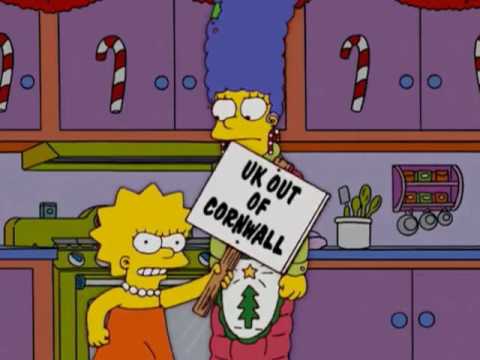 Political geography often finds its way onto The Simpsons. In connection with Queen Elizabeth's annual Christmas greetings, Philip Reeves explains how the most political of the Simpsons characters -- Lisa -- is herself now a factor in British politics. She is something of a celebrity among separatists in the English county of Cornwall, where tourism officials are now prohibited from using the words England or county.

This story requires some understanding of the distinctions among such terms as England, Great Britain, and United Kingdom. Although he twice makes a false distinction between politics and geography -- and online commentators object to some of his claims, CGP Grey offers some clarifying remarks on the differences.