It Is Not Just WalMart

More than a thousand garment workers in Bangladesh were murdered by their employers last month in a building collapse that finally allowed some people to understand what had long been obvious to anybody willing to pay attention: The race to the bottom in prices has real costs in human lives.

Years ago, of course, the labor movement in the United States was catalyzed by similar crimes, notably the Triangle Shirtwaist Factory Fire of 1911. Activism led to improvements, but it also eventually fed the movement of work to places that were more "business friendly."

It has been relatively easy to hide the consequences of off-shoring from customers who are pleased by low prices and whose attention is diverted by modern-day "Bread and Circus" distractions and do not know much geography. One advantage of social networking, though, is that truly poignant stories become so widely known that they cannot be ignored. Initially some large companies expressed relief that their products were not on the assembly line when the deaths occurred. This did not suffice, of course, as ALL who produce in Bangladesh are in a sense accessories to this crime.

For this reason, most large importers of clothing from Bangladesh have agreed to an agreement that would enforce some level of building-safety requirement. They are not committing to treating workers well -- only to ensuring that they do not die at work in large groups. It is not surprising that the one company most responsible for the fixation on low price at any cost has eschewed this agreement.

WalMart -- which was on Radio Boston yesterday extolling its treatment of retail workers -- has announced that it will do its own inspections, and has warned consumers that they will bear the cost of any needed improvements. 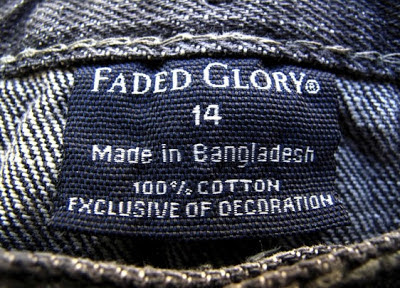 By promising to pass along the costs of safety improvements to consumers, WalMart is -- in its own perverse way -- admitting something that neither they nor bargain-hunting customers have wanted to admit. If something seems cheaper than it could possibly be, it is coming at a huge cost for someone else.


We can blame WalMart -- and I do -- but people too often see themselves as consumers rather than humans or citizens. And as consumers, too many focus on price only, rather than costs. For this WalMart is just the most egregious example of terrible values that have become all too widespread.

Posted by James Hayes-Bohanan at 9:07 AM