Like the great rapper Kid Frost, Taylor Mali is a high school teacher whose poetry eventually led him out of the classroom. In Mali's case, though, his post-teaching career is itself a celebration of the great work of fellow teachers. (Nothing against Frost, of course, whose poetry focused on diffusing gang violence among his students and their peers.)

Mali's launch into popular culture was the result of an insult -- a very common one endured by teachers -- that hit him the wrong way but at just the right time. A lawyer (not one of the good ones) sneered that teachers are those who cannot do anything, and therefore do not make anything. Unable to rest after failing to deliver a snappy retort, Mali answered the question, "What do you make?" with biting wit. His slam delivery of the poem is invigorating; but he himself recommends the version below, delivered by fellow teachers.

Soon after learning about his poetry, I found his book What Teachers Make: In Praise of the Greatest Job in the World. I had a class of future teachers together the day after I bought the book, and was not able to play a video for them (we were on a boat with limited WiFi). So one of these students read the poem to the others, to great effect. I highly recommend that teachers and future teachers read this poem aloud to each other, and I will be making this book a regular part of my pedagogy class. 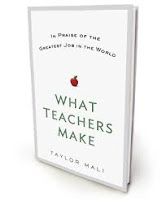 The small, inspiring volume is both back story and elaboration of the poem itself. One of the many themes he expands upon in the book is the idea that for some people -- such as the lawyer who started all of this -- the fact that teachers are underpaid itself is a reason to dismiss them. And once they are willing to work for less -- because of their passion -- paying them even less is justified. I would not say that this attitude is rampant among highly-paid administrators and trustees in education, but I did once have a provost explain my salary (about 1/4 of her own) in exactly these terms. In times of fiscal austerity, the class divide between professors and administrators can become a real problem if the administrators are not attuned to it --  not only in terms of justice, but in terms of the effectiveness of an institution. 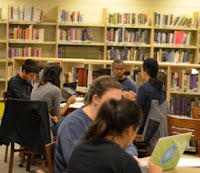 Poet Mali makes clear in his "I'll Fight You for the Library" that he understands as well as I do that the higher ranks of educational hierarchies include some who do not necessarily value teaching. The Peter Principle ensures that some administrators are educators who were "promoted" out of jobs at which they excelled and into jobs for which they had no aptitude, while others ended up in charge of schools by some career accident. His retelling of a true story that involved one of his mentors features one of each kind -- an administrator who remains an educator and understands the purposes of a library, and one who clearly does not.

The misnamed "accountability" movement has only served to increase the divide between teaching and administration, perversely punishing the former while rewarding the latter. I have the privilege of bring an educational outreach program to schools on a weekly basis -- a program with a large "wow" factor. I mean that literally -- students of all ages sometimes yell "Wow!" when they see the giant globe we bring to their schools. With increasing frequency, our program is canceled in favor of standardized tests, and with increased rarity do we see school administrators. We have been on the cover of more newspapers -- local and regional -- than I would ever have thought possible, yet MOST school principals cannot find the time to witness even 20 minutes of remarkable student engagement.


Posted by James Hayes-Bohanan at 9:58 PM