I am too young -- believe it or not -- to have watched Peyton Place as a TV series, and have never seen the original film nor read the book. Yet I cannot think of Meadow Lane Apartments in Arbutus, Maryland without that title coming to mind.

This was the site of my last bachelor pad and first marital domicile. It was also the largest of several inexpensive apartment complexes within a reasonable walk or short bus ride of our university. More than three hundred units housed an eclectic mix of working-class families, recent immigrants, and students in relatively decent conditions. (Among the recent immigrants were many from India; when Hare Krishnas came to our door, it was to ask if we could point them in the direction of any new Indian families.)

Among the scores of student residents were many who were "playing house" for the first time, and the drama of break-ups, make-ups, love triangles, trysts, and other sexual intrigue was often palpable. Hence the association with the place of soap opera legend.

I moved into Meadow Lane on a dark and stormy night, very shortly after a schizophrenic escapee from a nearby mental institution broke into a house I was sharing with three other students a few miles to the south. That story -- and the brief horror film we shot there -- are tales for another day. I moved into Meadow Lane with the housemate who had actually introduced me to that escaped patient (as I said, that's another tale), and shared it with two other students before the Love of My Life joined me there during our second romance.

Fast forwarding over a quarter century -- which was recently recounted in the New York Times -- we have been looking through old photographs to show our (then) teenager. Pam found a sales brochure that she must have been given the first time she moved into Meadow Lane, which was before our time. The brochure is shown here because of what it conveys about a sense of place. 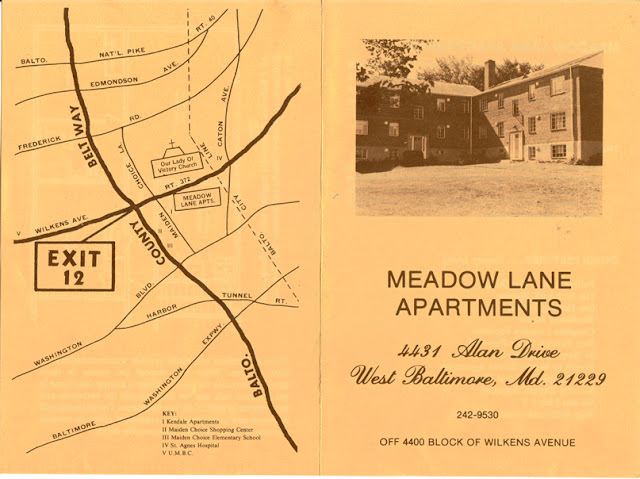 The brochure puts me in mind of Cities on Stone, in which John Reps compares the lithographs used to attract settlers to new towns in the American West to the realities of those towns. They were not dramatically untrue, but they tended to emphasize order and safety to a degree not quite warranted.

The outer cover features a map, and conveniently advises readers how to find Alan Drive -- which is contained entirely within the complex -- from Wilkens Avenue, which is more widely known. The photograph does not try to exaggerate the level of luxury. The map serves not only to locate the facility, though: it also reinforces its convenience and its association with the county (safe) rather than the city (not safe). A nearby church is prominently depicted, though is far less important than such other features as the university. 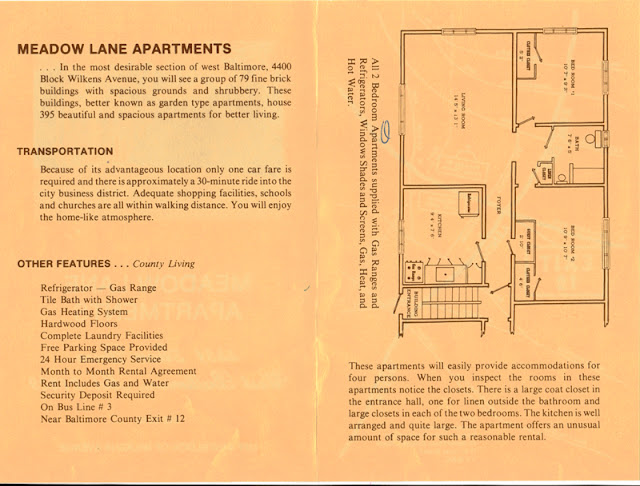 Just as the map as the only reference I have ever seen to a "Baltimore County Beltway," the interior of the brochure includes many symbols of "county living," most of which one would normally not associate with any particular kind of neighborhood, such as the presence of a refrigerator. (The now-famous photograph in the aforementioned NYT article, incidentally, was taken in the very center of the city!)

Whether county or city, the apartments were quite decent, and the floor plan convenient. An arch in the center (between the living room and the two bedrooms) was actually a bit charming, and something we always hoped to find in subsequent lodgings. 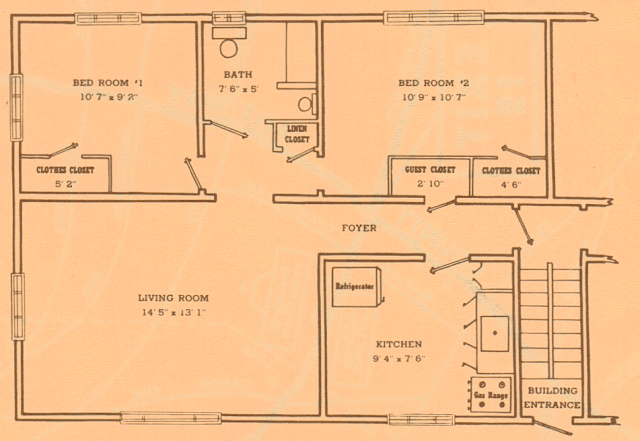 The actual location of Meadow Lane is the entire loop of Alan Drive and the first block of Hooper Avenue, as shown below. It is convenient to UMBC, otherwise known as UCLA -- University of Catonsville, Left of Arbutus. The site of the proposal mentioned in the NYT article is clearly visible -- Poplar Avenue, at the southeast side of campus.

Those who are still reading are perhaps doing so simply to find out what "L.S. #1" means. Some have already guessed -- it's the Love Shack. Love Shack Number One, that is. We are now on L.S. #7, which is quite a different, well, Place.


Posted by James Hayes-Bohanan at 2:52 PM