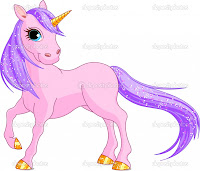 The pink unicorns are rampaging again!

The U.S. Federal Reserve had some good news today: household wealth in the United States increased by three trillion dollars in the last quarter of 2013. That's $3,000,000,000, for those keeping score at home.

Searching the Fed web site for the term "Gini Coefficient" -- a common measure of income inequality -- I could not find any recent data. I found tables describing the total wealth in quite a variety of ways, but not stating how much of the increase wealth is accruing to people at various income levels.

The most recent reports on income inequality from other sources, however, indicates ever-increasing wealth concentration, overtaking many nations that are described -- mistakenly it seems -- as "less developed" in relation to the U.S.

Where do the pink unicorns come in? As I tell my classes in relation to the geography of global trade -- and as I have written several times on this blog -- free markets are as common as pink unicorns. Since Ronald Reagan's days at least, the United States has made strong rhetorical commitments to free trade, and has insisted on trade liberalization in the smaller economies.

Meanwhile, the U.S. Government -- and the Fed in particular -- intervene constantly in the economy. In news articles about the recent growth announcement, a crucial detail was buried far below the headline. As Jessica Rinaldi writes in the Reuters version of the story, the Fed's own "ultra-loose monetary policy" is responsible for much (perhaps all?) of the growth in household wealth.

The policies that are intended to grow the economy grow it at the top, while other policies -- such as a refusal to raise minimum wages and a health-care reform that keeps insurance companies in the loop -- limit growth at the bottom. The Brazilianization (that is, growing income inequality) is a predictable, if not calculated, outcome of policies that are far from neutral.

Posted by James Hayes-Bohanan at 12:35 AM