NOTE: This is no ordinary blog post. It has two action items, a provocative video, and an uplifting radio piece.

Faced with a national education regime that is increasingly hostile to teachers, students, and learning itself, a growing number of parents are pushing back. Among the recent resisters is Ricardo D. Rosa of New Bedford, Massachusetts, who is opting out of state-mandated testing. His letter to the school committee was published in the Washington Post and reads in part:

He is absolutely right, of course. The "reform" movement is a well-funded, bipartisan movement to centralize public education in the United States to a level that is difficult to believe possible in a democracy.

(Note: at the time I wrote this, I do not think I realized who Dr. Rosa was. I now count him and his brother -- also Dr. Rosa -- among my friends and among the educators I admire most.)

It sounds shrill to blame "corporate interests," but it is the case that Bill Gates, the Waltons (of WalMart fame), and Pearson Publishing are both paying the piper and calling the tune. Contributing generously to media and elected officials of all political persuasions, they are creating an entirely new educational ecosystem. As I have written previously, those calling for accountability for nickels and dimes are not held accountable for millions nor billions.
A puff piece on the Common Core is but the latest in a growing number of examples of what generous donations can buy. Contrast the "reporting" with the responses from educators to see that NPR's usual rigor seems to have gone missing. (Within hours, comments were curtailed at a few dozen.)

Fortunately, Dr. Rosa is not alone. The kind of resistance that he exhibits and challenges others to undertake is growing. On the same day that I learned of his challenge, I saw this cartoon ... 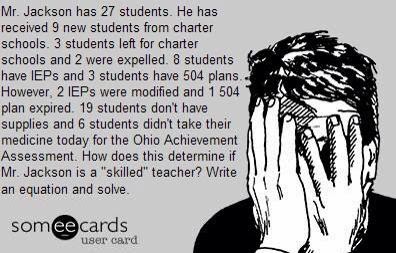 ... and I learned that some educators are trying to make this teachers' fantasy a reality. In February, Bret Wooten of Lewisville, Texas began a petition to require the governor of Texas and its legislators and education officials to pass the tests that they require of students, and to publicize their scores. His effort grew slowly within Texas for a few weeks, but in the past couple of days, a growing number of petitioners from other states have signed on. If you are reading this, consider adding your name, as I have done (#116).

In Holyoke, Massachusetts, teacher Augusto Morales has recently spoken out against the humiliation and disruption caused by extreme testing in his school. It is no coincidence that the strongest resistance is emerging in low-income, urban areas. The very students who were the purported beneficiaries of No Child Left Behind are the ones most likely to be left behind by high-stakes testing, nonsensical curricula from Pearson, and inappropriate pedagogy from Bill Gates.

I read similar anguish in reports from teachers throughout the United States, many of whom report absurdly intrusive regimes of testing and test preparation. Even the bodily functions of teachers and students are increasingly likely to be regulated by local officials trying to please distant educational bureaucracies.I admire Mr. Morales for bringing that widely-felt pain directly to the attention of some of those responsible.

I teach at the university level and my own daughter has so far attended private schools (in large part because of what NCLB has done to public schools), so I could easily ignore all of this. But I would do so at great peril. For one thing, those who are orchestrating destructive reforms in K12 are working to dis-empower university faculty through various means -- from the elimination or reduction of tenure to cryptofascist accountability regimes.

Moreover, those of us who enjoy teaching at the university level are now confronted with the first wave of students who have never known anything but NCLB levels of testing, and it shows. Just today I had students -- very bright students -- absolutely panicked about a very modest mid-term I am giving them later this week. They expect detailed reviews not only of the content but also of the exact format of the exam -- and the strongest students are fretting just as much as the weaker ones. Sadly, it is warped visions of "college
readiness" that instills approaches to learning that are not at all collegiate.

Finally, many professors are teaching future educators and some of us provide ongoing professional development to in-service teachers. If we care at all about the effectiveness of the work that our students are going to be doing, we cannot ignore policies that will prohibit many of the best practices we teach. It is for this reason that I am grateful to fellow Massachusetts academics who have prepared a detailed critique of the MCAS/PARCC/Pearson regime, and presenting it to the education policymakers in the state. I am proud to join professor Rosa (like me, he is both a father and a professor) and many others in endorsing that statement.

I need to end this post with something positive, and I am fortunate that my favorite librarian -- with whom I discuss these issues often -- today shared this story of a very different kind of higher education. This is eleven minutes of delightful audio about Quest University in Canada. Just listening to this positive report about education is something every teacher should do as a treat to the self. The report is at once an eloquent description of what has gone wrong in education and a glimpse into what happens when teachers and learners are enabled to flourish.

Posted by James Hayes-Bohanan at 2:29 AM