This handful of letters ruled my life during my last year of graduate school. I used them in thousands of calculations as I tried to understand what was causing high rates of reservoir sedimentation in recreational lakes north of Cincinnati.

As soil nerds will recall, the USLE is a model for estimating soil erosion from slopes. Specifically, it estimates sheet and rill erosion, a combination of what is removed by water flowing in thin layers over a surface and water concentrating into small channels, known as rills.

An explanation of the formula is at the end of this post, along with the answer to sedimentation question. First, however, I need to describe the two slopes of this tale, both of which I noticed on campuses in the past couple days.

The first is just across the street from my office, where the front of our campus center has recently been renovated (environmental side note -- all renovation work in our campus center takes a long time because it was build in the heyday of asbestos-based construction). The project is laudable for the considerable improvement in ADA accessibility, though this remains limited by an inferior elevator. All new construction on our campus is LEED certified, and though I have not checked I assume that major renovations are as well. If it is, the project reveals a couple of limitations of the certification, and certainly reveals how far our campus has to go in sustainability. At least two new televisions were installed in the renovated space, and seem always to be broadcasting to nobody in particular.

And then there is this slope: 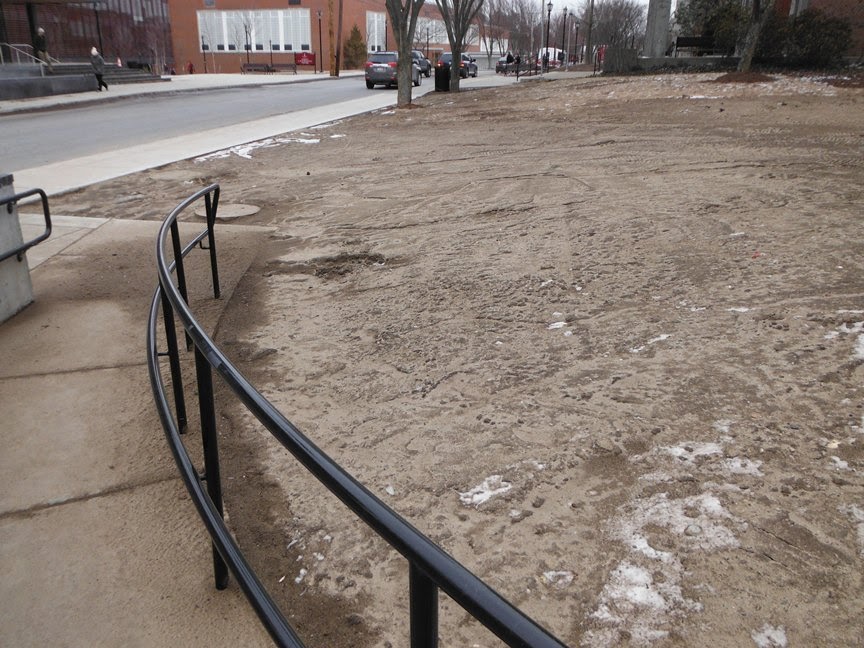 It might be legal -- I see things like this all the time -- but it is certainly not appropriate. Exposed soil is subject to removal by falling rain and transportation by flowing water. In regions with sensitive waterways -- and southeastern Massachusetts is certainly such a region -- the protection of soil during and after construction is an easy way to protect water resources. Despite heavy investment in wetlands protection through hundreds of conservation commissions, Massachusetts does not require erosion protection that has become routine in places like Maryland, which values the Beautiful Swimmers of the Chesapeake Bay.

On Friday, I visited another area of new construction -- the Glover School in Marblehead -- and found much more appropriate treatment. Both a geotextile cover and a silt fence are in place. 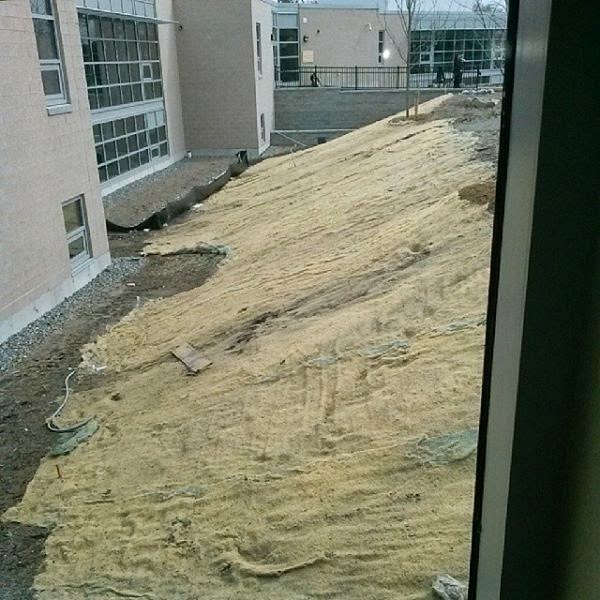 Admittedly, this slope is steeper and needs more protection, but it is clear that the lesser slope at BSU is losing soil to local streams, and should really be armored in a similar way, even if such a step is not required by law.

Back to the Forumla

As promised, some details on the USLE formula itself:

The Universal Soil-Loss Equation is a statistical model that originally was developed to help farmers make decisions about soil protection. It is based on copious amounts of data correlating soil loss with variations in five factors. Each of the factors is calculated and the results multiplied together to estimate "actual" erosion. This is then compared to the "tolerable" erosion, or the amount that a specific kind of soil can lose without diminishing soil fertility. Thousands of soil types have been identified in the United States alone -- they are known as soil series.

R -- Rainfall intensity is a measure of the erosive work that can be done by falling rain. It is calculated for an area on the basis of the most intense rainfall events of a typical year. A few episodes of intense rainfall can be much more significant than many days of gently falling rain. Climate change may result in increasing R values, resulting in greater soil erosion in some places.

K -- The erodibility constant for each soil series is based on its texture (that is, particle-size distribution) and structure (specific organization of particles). Some soils simply wash away more readily than others.

LS -- The length-slope factor was the most difficult for me to calculate for my thesis, because it reflects the tendency of water to accelerate as it flows downhill. This effect involves both the distance traveled and the angle of the slope, but the relationship between the two is not linear.

C - The crop factor accounts for the shape, size, spacing, and timing of plant structures. Data are extensive on common crops such as wheat and corn, but the protective effect of vegetation can also be estimated for any kind of plant cover, from golf-course grass to oak forests. A common misconception is that roots provide the main protective effects for soil; in reality the ability of leaves to intercept falling rain is much more important. Water dripping or even misting from below a leaf canopy is usually far less erosive than water drops that have reached a given size and velocity as free-falling rain.

P - The practices factor accounts for things that a farmer can do deliberately to slow down erosion, such as plowing parallel to contours, spreading straw on the ground after harvests, or building small berms to interrupt the flow of water. Many of these can be modified for construction contexts.

And back to the reservoirs

In the case of the reservoirs I was studying, it turned out that the watersheds were being managed properly to minimize erosion from the time of reservoir construction through the time of our study, and presumably to this day. Unfortunately, erosion rates were quite high anyway, because of previous generations of destructive agricultural practices. Put simply, pigs had been allowed to overgraze in the upper portions of the watershed, and had caused tremendous erosion in the early 20th century. Much of that soil was stored temporarily in lower portions of the watershed, and good forest management was actually causing it to be released during the period of our study. This was as ironic and unfair as it was inevitable, and we  were able to offer reservoir managers very few ideas for protecting their investments.

Posted by James Hayes-Bohanan at 4:42 PM