The Mindset List produced each year by the librarians at Beloit College in Wisconsin is a reminder of the gradualness with which one generation fades into another ... and another. The librarians produce the list as a service to fellow academics; otherwise, we fail to notice bits of "common knowledge" that are no longer common. When I was a student, for example, even those who did not know any details about Love Canal knew that it was a very serious situation indeed -- an environmental disaster with serious political ramifications. Those two words could be invoked almost like a weapon, to indicate a very grave situation.

A few years ago, I realized that the phrase had no meaning at all for most students, and eventually realized that a whole host of powerful phrases has lost their power -- from "Iran hostage" to "Sandinista" to "Silent Spring" to "Population Bomb." As with so many things, we Baby Boomers (those born between 1946 and 1964) are getting special attention in terms of lost cultural touchstones -- in the form of the Mindset List itself and in the form of a wonderful new video series from the New York Times. The Retro Report is a series of more than thirty (so far) short videos that revisit stories from the past -- many of them stories more likely to be remembered by Boomers than by our students or children.


The video about Love Canal is both a thorough introduction and a very interesting update of this pivotal story in the environmental history of the United States. My 2011 Ditching EPA post makes the case for the continued relevance of the Love Canal debacle.

Complaints about the EPA are as old as the EPA itself, as some folks have found it expensive or inconvenient. As I write today, however, the possibility of it being disbanded is a real one for the first time.

It is worth remembering that before the EPA, it was perfectly legal to store this in a residential neighborhood. 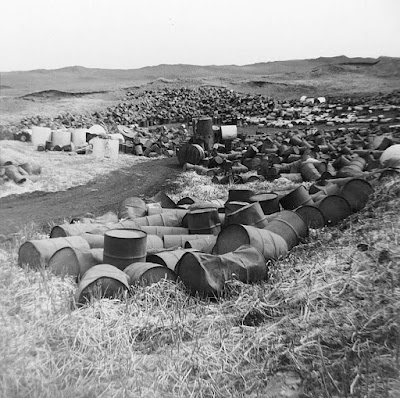 Learn more from the Love Canal page at SUNY-Geneseo.

Posted by James Hayes-Bohanan at 5:59 PM