My favorite librarian and I have been reading Unfamiliar Fishes, a surprising book by humorist and public-radio personality Sarah Vowell. The pleasant surprise of the book is Vowell's caliber as a scholar and historian of colonialism -- particularly colonialism as it relates to religion. The unpleasant surprise is the hubris and audacity described on just about every page of the book.

As Pam read a passage from the middle of the book today, I was actually startled by a level of audacity that was surprising, even in the context of this sordid tale of impure puritans abroad. Act 16:9, Vowell explains, was cited by the New Englander conquistadors of Hawaii as an excuse to Christianize the islands, just as their forebears had convinced themselves that Native Americans had invited them to the shores of Massachusetts. 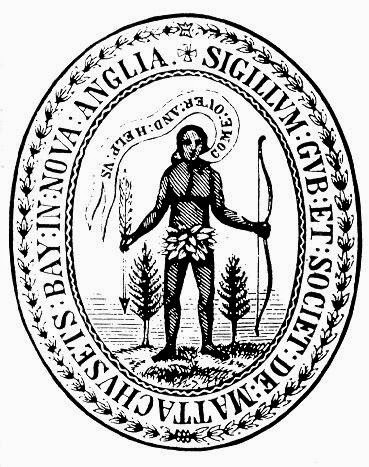 As Vowell points out -- and as Pam already knew -- this delusion is immortalized in the seal of the Massachusetts Bay Colony, which served as the first seal of our adopted state. In mid-conquest, the words "Come over and help us" were put in the mouth of the conquered. Nothing illustrates American exceptionalism better than this. If colonization was both ordained by God and desired by the colonized, it is very difficult to think critically about America as just another member of the community of nations.

Posted by James Hayes-Bohanan at 6:45 PM