I became a geographer as an undergraduate, while Ronald Reagan was president. His lack of international experience and his commitment to simplistic views of geopolitics was worrisome, and also amusing. This poster went on my wall in those days, and I moved it from place to place for years. The original, tattered print is probably buried in my office somewhere; I was fortunate to find a clear version on Kelso's Corner, the blog of Washington Post cartographer Nathaniel Vaughn Kelso (the actual artist is named Horsey). 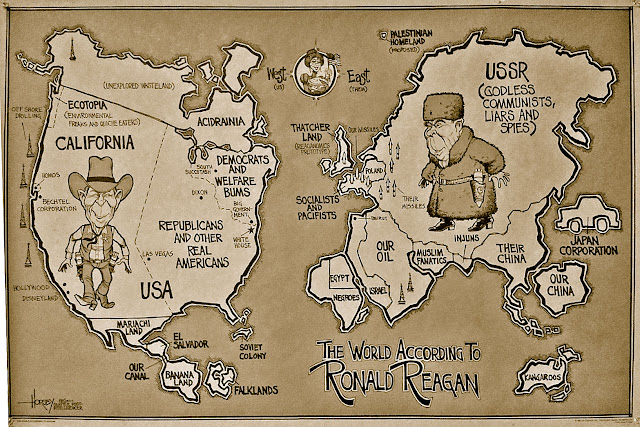 Those who know me know that I could digress -- and I probably will in class next week -- about many parts of this map. But for now I will focus on just one corner of the map -- the outsized island labeled "Our China" -- better known as Taiwan or more archaically as Nationalist China. 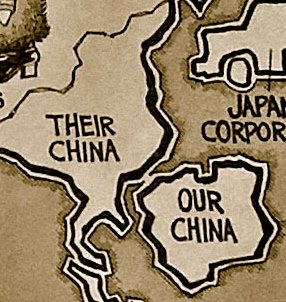 Of the two, Taiwan is by far the closer to the United States in terms of political outlook, but mainland China is far more important in economic terms, as a major supplier of many billions of dollars in products each year. Even before trade became so important, its military might meant that U.S. presidents were loathe to speak very honestly about our relationship with Taiwan, generally pretending not to recognize it.

So even though Ronald Reagan was perhaps the staunchest anti-communist president we ever had, he participated in the awkward diplomatic charade of pretending not to recognize both Chinas as the same time. In fact, he refused to speak to Taiwan's president, even though he had a deep ideological affinity for Taiwan. None of Reagan's successors have changed that practice..

Technically, of course, it is still the case that no president of either party has yet parted ways with the Gipper in theory or in practice. But a president-elect has done so, and knowledgeable diplomats are aghast. Even those who wished to change the policy have been alarmed by the cavalier way in which it was done. The exception seems to be the intransigent John Bolton, who might actually have orchestrated Donald Trump's latest faux pas.

Writing about the call and its aftermath, Evan Osnos of The New Yorker concedes that it might very well be time to end the charade and admit our de facto recognition of Taiwan. But the approach was reckless, creating substantial new risks.  Osnos explains how entertainer-turned-politician Trump may actually have walked into a trap. He writes:


I spoke to a former Republican White House official whom Trump has consulted, who told me, “Honestly, the problem with Donald is he doesn’t know what he doesn’t know.” It turns out that is half of the problem; the other half is that he has surrounded himself with people who know how much he doesn’t know.

As evil as John Bolton's intentions usually are, he is quite smart, and certainly able to realize an opportunity in Trump's lack of background in foreign policy. His influence is all the greater, given that Trump has waived off most of the actual policy briefings he has been offered. Osnos notes that this is exactly what George W. Bush did as he entered office -- when he ignored intelligence on preparations then being made by one Osama bin Laden.

Or perhaps it was not ignorance at all, but a very simple conflict of interest. Osnos writes:


Trump and his family are currently trying to win a lucrative contract with a Taiwanese city: “A representative from the Trump Organization paid a visit to [the city of] Taoyuan in September, expressing interest in the city’s Aerotropolis, a large-scale urban development project aimed at capitalizing on Taoyuan’s status as a transport hub for East Asia ...

Posted by James Hayes-Bohanan at 12:21 AM