I always knew that the U.K. had a lot of pubs, but I did not realize it was quite this many. Go ahead, count them:
Done counting? It is quite a few, is it not? Some but not all are mentioned in Bill Bryson's book Little Dribbling, which I have written about recently here and here. I expect to have maps of some of those pubs in the spring, when my geography seniors will be mapping some aspects of the book.

The snapshot above was created for the benefit of those whose computers or phones might not support exploration of the actual map. It is included in an article that finds this pub map somewhat reassuring. One comment suggests -- humorously -- that the map reveals something about alcoholism in the UK. I am no expert on pubs, but the ubiquity depicted here reinforces my notion that pubs are at least as much about community as they are drink.

The default view of the actual dataset is an area of London that includes several dozen pubs, centered on a Yahoo! office. I chose to explore Glasgow, which will be a destination for me in the next few years, possibly for a family wedding and definitely to explore the place from which the first Bohanan (Buchanan) migrated in 1734. (Andrew Bohanan was 25 when he was pressed into naval service, perhaps as he overstayed in a pub one night; he promptly went AWOL when he reached Boston. Yes, I am an 11th-generation undocumented migrant. But I digress.) 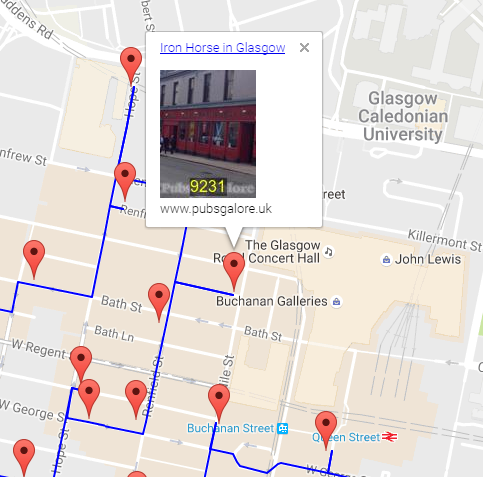 When the time comes, I will need to do "research" in several pubs, but I think I will start with the Iron Horse, handily located as it is near Buchanan Street and Buchanan Gardens. In addition to a pint or two of ale, I will also be seeking the family recipe that we always keep at our house.

Posted by James Hayes-Bohanan at 12:50 AM