I really did not want to see Before the Flood, even though I teach several courses that relate directly to it. I pictured myself viewing it like a kid (or me) at a scary movie, watching through little gaps between my fingers as I try to shield my eyes from the screen. I have watched An Inconvenient Truth and its sequel a few times, and even with Al Gore's dry presentation, I found it nervous-making, at least.
So when I heard that a real film-maker had produced something very convincing about climate change, I knew that I had to see it and would want to avoid it, at the same time. Given the dramatic potential of climate change, I feared being sucked into an experience that would manipulate audience emotions with dramatic music and images of peril.

Thankfully, this film does none of that, and I managed to watch it three times in a ten-day period, without being scarred.

Leonardo DiCaprio documents his travels as the U.N. Ambassador for Peace over a two-year period. Of course, I felt compelled to map his travels for him:

He speaks in grown-up terms to a broad audience about the physical evidence for climate change and the possibilities for mitigation and adaptation, though students I showed it to found attention to remedies insufficient.

The variety of places included in the film exemplify the many important ways in which climate change is experienced -- from the disruption of crops to the rising of seas to the disruption of Hollywood film planning. Among the more interesting remedies is a more concerted effort to build batteries. The earth receives far more solar power than is needed to provide all the electricity we need -- even in New England, solar power is providing almost all of the electricity my family uses over the course of the year. This is only possible because our summer surpluses are "stored" on the grid. For solar to be a comprehensive solution, advanced batteries must be more widely available, and DiCaprio explores how this could be done.

DiCaprio could have focused more of the film on mitigation and prevention if he were making it for any audience other than a U.S. audience. But in this country, a significant amount of any discussion of climate change must be spent (squandered) on establishing that it even exists, despite mounting evidence that it does. 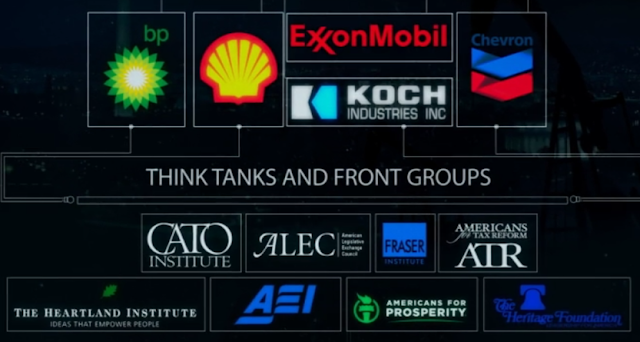 In my own classes, I have learned to spend relatively little time on climate denial for two reasons. First, I do not have to undertake similar apologetics for other topics, even if the topics are uncomfortable. Second, moving the discussion from scientific questions to matters of opinion is likely to use quite a lot of class time, and to do so ineffectively.

When I showed students an early draft of this blog post and asked for their suggestions, though, several suggested that I include the screenshot above -- it is a map of the relationships between semi-academic or even faux-academic organizations and their funders. The funding does not necessarily negate the findings of these think tanks, but it does suggest that skepticism would be better placed on the skeptics than on the scientists they doubt. Or harass and threaten, as DiCaprio details in the case of a scientist whose family was bullied by deniers.

DiCaprio's conversations with local planners in Miami are among the more persuasive sequences in Before the Flood. While members of Congress can respond to campaign donors, local officials have to respond to rising water. The increasingly frequent "sunny-day floods" in Miami are impossible to ignore, and are a very good reason to watch this film.

Shortly after I watched the film, I found a similar story from my former home in Maryland, where I studied and worked on the Chesapeake Bay in the 1980s ... and where I enjoyed a skipjack sail last summer. Baltimore Magazine recently published The Sea Also Rises, about the loss of low-lying areas in the Chesapeake Bay.

When I think of areas that are particularly vulnerable to rising waters, of course, I think of Miami, New Orleans and Louisiana generally, Bangladesh, and island nations such as Kiribati. But I should have thought of the unique geography of the Chesapeake Bay. Known by indigenous people as Great Shellfish Bay, it remains an important fishery, but the fish, crabs, and oysters are under pressure from suburban sprawl and its effects on both the quality of water and the concentration of runoff. The bay is quite shallow -- less than 40 feet deep over most of its area.  If a map of the entire 200-mile-long bay were printed on a sheet of paper, its greatest depths could be represented by scratches that would not go through the entire thickness of the sheet. Because the Chesapeake estuary is a post-Pleistocene flood of a series of river valleys, its coastline is incredibly intricate -- 8,000 miles of water front surround a 200-mile body of water --  a real boon to realtors!

I'm not sure whether that 8,000-mile figure includes islands, but it is certainly the case that islands are an important part of the human geography of the Bay. And it is the water rising around these islands that is the focus of Ron Cassie's excellent reporting.

In 2010, for example, this house became the last house to be lost to the waters rising around Holland Island. A significant portion of the island has disappeared since I took a course on the Bay as an undergraduate.
Lagniappe -- China database

The film includes pollution monitoring in China as one example of the many ways in which people around the world are taking responsibility for addressing climate change. I decided to track down some details for readers of this blog.

The organization profiled is the Institute of Public and Environmental Affairs (IPE), which is described in some detail on social-entrepreneurship website of the Skoll Foundation. The Institute hosts a real-time map of pollution sources of various types, shown in both English and Mandarin.
Some of these sources contribute directly to climate change; some also compound the damage to public health caused by climate change, and others are simply environmental problems that warrant attention and abatement efforts, regardless of any climate connection.

Posted by James Hayes-Bohanan at 2:29 AM