Spoiler alert: This review reveals the main finding of the new documentary First Contact.
Watch the film first if you prefer a slow reveal. 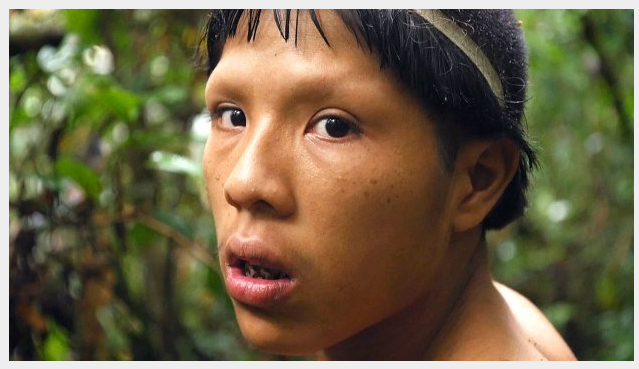 While I was traveling in Nicaragua, my favorite librarian found a documentary that she thought would interest me. We had to tamp down a bit of skepticism because the title First Contact: Lost Tribe of the Amazon (see also: Netflix) does suggest wildness tropes that we have encountered in the 1960 sci-fi piece Lost World, in a problematic NatGeo documentary on the region, and in many narratives described in the book Olhares, which I co-authored with colleagues who study and/or live in the Amazon.

Since I wrote my dissertation in the Amazon and have been back twice -- once with my family -- we set our misgivings aside and watched this short (49m) documentary. It turns out that it takes place in Acre -- just west of my research area in Rondonia -- and neighboring parts of Peru. At first, it seemed like it was just going to play with the usual tropes of exaticism and danger (there is, after all, some actual danger to document).

Eventually, however, this story of initial contact with isolated people poses a plausible hypothesis that I had not encountered before. The entire area had been involved in the extraction of rubber over a century ago, and much of the labor used in that trade had been forced labor. The tribes that have emerged in recent years might not have been isolated since the neolithic period, as is often supposed. Instead, this film suggests, they may have been in hiding for a century or two, avoiding enslavement. Their emergence at this time -- including attacks on remote riparian villages -- could be the result of two factors. First, the oral history of long-ago slave raids may have faded in the minds of the young people of the Txapanawa. Second, illegal incursions of loggers or miners into the Alto Purús National Park may be displacing them from the refuge that had protected them since the early days of the rubber trade.

Posted by James Hayes-Bohanan at 10:27 AM