Coffee from the Maven to Mandelas

When I was asked to provide coffee for some of the morning class sessions of our university's visiting Mandela Fellows, I decided to provide a different coffee each day. Each coffee gives us a chance to explore something a bit different about the geography of coffee.

All of the coffees I am providing are fair-trade, organic coffees from Deans Beans in the town of Orange, Massachusetts -- about 100 miles northwest of our campus. The proprietor is Dean Cycon, a leader in authentic fair trade, and the author of Javatrekker, a book I use in all of the courses I teach about coffee. Every coffee his company sells is grown by cooperatives he has visited personally; most of them are described in his book, and all are described on roastery's web site.

A feature of the web site that reflects the whimsy that Cycon brings to the very serious work of coffee is the ability of customers to create their own blends and packaging. Of the coffees I am preparing for the Mandela Fellows, two are custom labels for this event and the other two are standard offerings. The labels are shown here in the order I will be serving them.

Almost all coffee is from one of types -- the Arabica species or the robusta variety of the canephora species. The majority -- about 70 percent -- is Arabica. It is the more difficult to grow and does not have as much caffeine, but its flavor is generally preferred and its price higher. All of the coffee we will share this week is Arabica, which in a way is misnamed! Coffea arabica should really be called Coffea ethiopica, because it originated in a place that is now part of Ethiopia. Yes: humans and coffee began in the same part of Africa!

It is for this reason that I chose coffee from the Sidamo region of Ethiopia for our welcome. The region is featured in the 2006 film Black Gold, which I show many of my students, and in Javatrekker. The film -- which can be borrowed or viewed online through the BSU Maxwell library -- features Tadesse Meskela,  from whose cooperative Deans Beans purchased this coffee.

My selection of coffees for the week is guided by my desire to share coffees that are geographically diverse and that allow me to focus on different aspects of what makes coffee important. For Tuesday's coffee, I chose Timor Astabe, from one of the world's newest countries: East Timor. Growers in East Timor are the subject of the short coffee documentary One Cup (scratchy versions of which can be viewed at the Internet Archive).

For Thursday's coffee, I decided to emphasize the relationship between coffee and climate change. Because it is a crop with very specific requirements of rainfall, temperature, and especially the timing of rainfall, climate change is part of the discussion of any coffee. In Peru, coffee farmers have the added concern of dependency on glaciers high above the coffeelands for part of their water supply.

It is for that reason that Deans Beans chose a partner cooperative in Peru for its first carbon-offsee coffee, NoCO2 Peru. This inspired me and my colleague Dr. Rob Hellström to plan Coffee and Climate Change, a course that would involve other Peru cooperatives and periglacial research stations in the Andes. Unfortunately, we have not yet taught the course, but it could happen in our summer 2020 session.

Today would be the 59th attainment day of Ben Linder, a civil engineer from the United States who was assassinated during the Contra War in Nicaragua. His birthday would be tomorrow, July 7. Today's coffee is named in his honor, and was harvested in the communities of northern Nicaragua to which he was bringing renewable electric power at the time he was killed.

He has now been deceased for longer than he was physically alive, but his spirit lives on in the work that he did, the work he inspired, and in the gratitude of communities to which he provided light. His story is told in the book The Death of Ben Linder and in the half-hour documentary film American/Sandinista. 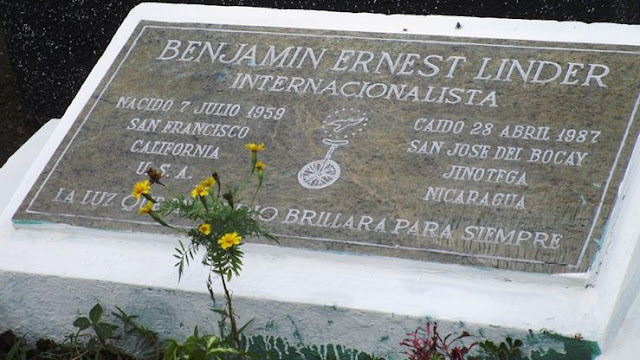 More than 100 BSU students have visited the grave where he is buried in honor, and several dozen have visited his hydroelectric projects or the cafés that were established in his name by victims of the war. Our students have been inspired to propose a Ben Linder Café on our campus, and we are still hopeful that it will one day be serving students, staff, and visitors in the atrium DMF Science and Mathematics Center. 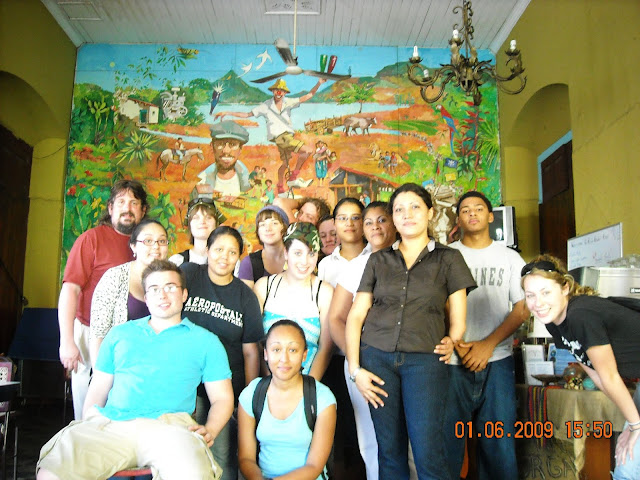 What You Can Do

To see more delicious, ethical coffee -- and education about coffee -- at BSU, please like the Ben Linder Café page on Facebook, follow posts there, and invite your friends to do the same. Contact me (jhayesboh@bridgew.edu)  if you would like a café education program for your club or other organization.

Posted by James Hayes-Bohanan at 7:16 AM