A recent hour of the NPR program On Point explored the question shown below. I had the luxury -- I must have been in the car for a long ride -- of hearing the whole conversation as it aired last week. Fortunately, journalist extraordinaire Linda Wertheimer had nearly a full hour to mull various aspects of the question with some bright people who have given it a lot of thought.

I recommend listening to the whole program -- including the calls from listeners -- for some important thoughts about a question I would frame in a slightly different way. As posed in the title, it seems that a binary answer is being sought. I would rather ask, "How can we maximize the benefits and minimize the harms of gentrification?" I would not have thought of it this way before hearing this program.

One of the callers in particular caught my attention. The experience of Portland, Maine validates the finding mentioned earlier in the program, that gentrification is not limited to large cities. I had been in Portland for the first time just a few weeks ago -- strange, since it is only a few hours from our home -- and had seen many of the positive things typically associated with gentrification. Food, arts, and music are providing for a gainful, interesting employment and an enjoyable city to visit or in which to reside.

But the caller validated another, more commonly raised concern about gentrification: rapidly rising prices. I had just seen evidence of that, from my safe distance as a potential tourist. Planning a driving trip to Nova Scotia, our first thought was to start with a short jaunt to Portland so we could continue to explore it. I started, of course, with hotel options, and found numbers like this: 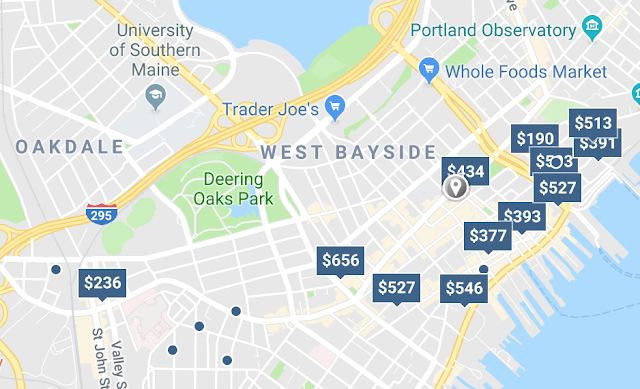 I am certain that pricing in other seasons will be lower, so we might plan a shoulder-season return at some point. After all, I barely scratched the surface of the coffee scene in Portland. But during this high season, a weekend in Portland would cost as much as a week in comparable lodgings elsewhere on our journey.

Lagniappe: As I thought about this some more -- about the competition for space pushing even relatively prosperous travelers away from this booming downtown -- I realized that I was forgetting an important facet of tourism that could prove very important in a place like Portland. The numbers on the Air BnB map of downtown are much lower, and they are clustered more toward the western side of downtown.
Clearly, many residents of Portland are crafting a strategy for staying in their homes that involves taking advantage of the very high costs of traditional hotels.

As I mention above, the changing economic landscape of a city is complicated, and we owe it to ourselves to think deeply about how to get the best outcomes for communities experiencing change. The hour-long discussion above is a very good start.

Posted by James Hayes-Bohanan at 11:36 PM