Note: This is an update on the ongoing crisis in Nicaragua. For detailed background, please see the #SOSNicaragua article that I posted on May 17 and continued to update until this week.

A friend in Nicaragua shared this terrible map today. It shows the geographic depiction of the killings at protests between April 18 and July 25. This is a pace of state-sponsored killing equivalent to a Kent State massacre every day. In a country 1/50th the size of the United States, the impact of such repression is difficult to imagine. 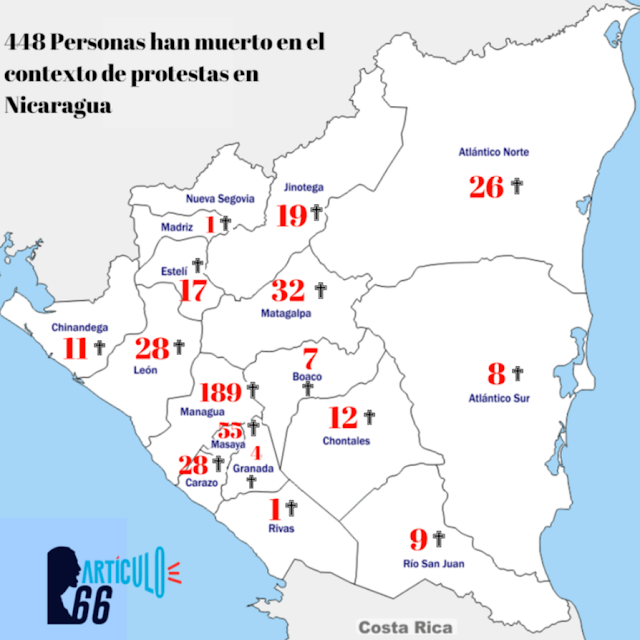 Not since the Somoza regime has the Nicaraguan government turned on a crowd in this way, though we are aware of previous acts of repression by the Ortega regime in recent years.

International condemnation has been widespread, including a bipartisan resolution by the U.S. House of Representatives. Perhaps anticipating that rebuke, Ortega sat for an interview with Fox News Monday night. Given the scant attention this story has gotten in the United States, the reporter does an admirable job of navigating the interview with a recalcitrant Ortega, who lies about almost everything but the name of his country. He does his best to advance the theory that the victims are the perpetrators of the violence. The next day, journalist Tom Phillips wrote a cogent analysis of the interview and the current state of affairs in Nicaragua. His reporting is the best recent overview I have seen, and is a reminder of the value of keeping journalists posted in a region so that they can learn its nuances.

The text of House Resolution 981 mentioned in the interview is available; I will be following any further U.S. actions with great attention. So far, I am cautiously optimistic about this response. Given the very troubled history of U.S. involvement in the country, it is important that any official response be very measured.
My hardworking, generous, optimistic friends throughout the country are affected directly. Many of them cannot get to work, for example, because buses are not running. If peace does not return in the next couple months, the coffee harvest will not get to market, eliminating the most important infusion of cash for most rural families in the north. For that reason -- and because I have not yet seen NGOs step into this area of need -- we have launched a short-term campaign for relief funds to share with the coffee communities with which we work directly.

As I am posting this, I have learned about some additional projects that our partners in Nicaragua are undertaking, and for which they will need our support. Please check this space for further developments.
Posted by James Hayes-Bohanan at 4:56 PM