I remember the first hours of my first (and so far only) visit to Cuba in 2003 as being a bit rushed. We had experienced a bit of delay at the airport and hotel check-in late on a Friday afternoon, so there had been little time for our group leaders to explain what the first part of our anthropology travel course would be. We simply piled on to our big Mercedes bus for a short drive across Havana, and were deposited into the foyer of a fairly large, modern synagogue.

The rush made sense in retrospect: we were trying to get to the sabbath services, which would begin at sunset. As unprepared as I was for the experience, many of the students in our group were even less prepared, moving out of several layers of their comfort zone in short order: first time on a plane for some, first time in a Spanish-speaking country for most, first time in an authoritarian country as well, and now the first time in a synagogue. In fact, it was adjusting to this that was a more immediate concern than any of the other layers: many of the students had never been to an Orthodox service and did not understand the segregation by gender or the need for men to wear yarmulkes. We got all that sorted, enjoyed the service -- in Hebrew and Spanish -- and then went downstairs for an experience that felt very familiar to me. The potluck supper in the basement felt like hundreds of church suppers I had attended.
This experience was on my mind during first day of Hanukkah, as I prepared our annual latke dinner for friends and considered the story of Genie Milgrom, which I had heard as I made coffee that morning. (Listening to BBC and NPR is an important part of my daily coffee ritual.) In it, journalist Greg Allen tells the story of a Cuban-American in Miami who was raised Catholic but discovered her Sephardic heritage from family recipes. 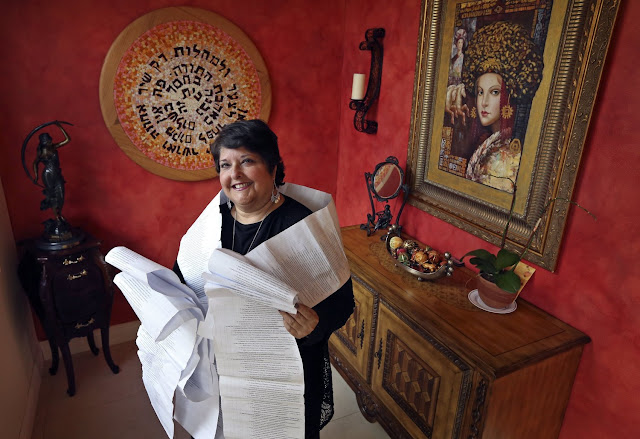 Her story is told in just five minutes, but it spans five centuries and three or four continents, so I have listened to it several times already, and look forward to listening with students in my course on the geography of Latin America.

This is because Milgrom's family story begins in her kitchen but passes backward through Cuba to Spain and Portugal, and then forward through generations of crypto-Jews throughout the Americas. These are people who lost their lives or their identities in the wake of the Inquisition. She now travels throughout Latin America, helping others to recover their stories. It is fitting that her story originates in Miami, which some consider the de facto capital of Latin America.

Her story reminds us that the Inquisition was not just the Spanish Inquistion, but that its abuses were found throughout the Iberian Peninsula.
Olinda is a beautiful little corner of Recife, Pernambuco, and in 1535 it was one of the first Portuguese settlements in what was to become Brazil. Today it is known for its fine arts, and my family was indeed browsing a gallery there in the year 2000 when we noticed something unusual about the building we were in.

Although brightly painted and opened to admit the midday sun, we noticed narrow windows, heavy doors, and some walls nearly two feet thick. When we inquired about the architecture, the gallery staff informed us: this had been an Inquisition prison. It was in that moment that I realized the global scope of those atrocities. Genie Milgrom's story took me right back to that visit.

Our own Hanukkah tradition continued, with our friend Scott lighting the Menorah for the first night. Between him and my son and daughter-in-law, photographer (and Scott's wife) Korin noticed an interesting figure looking down from the wall: Ché Guevara stares down from a plate I purchased during that 2003 Havana visit. 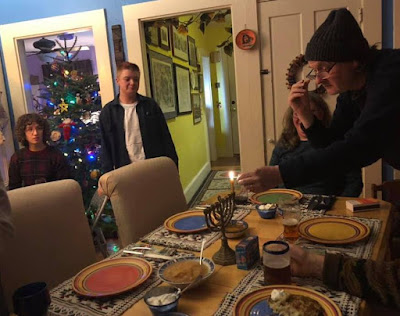 Posted by James Hayes-Bohanan at 6:23 PM