I thought I had learned a lot about grass from my work in landscape maintenance with which I funded the last couple years of my undergraduate studies. In graduate school, I learned quite a bit more from a couple of the professors in my graduate program.

Dr. Hilary Lambert had written her dissertation on the cultural geography of monocrop lawns: specifically, she had connected the obsession with uniform green lawns in the U.S. suburbs to social constructs of the British manor house. And this was decades ahead of Downton Abbey.

Dr. John Klink was my mentor through four semesters of teaching lab sections of physical geography and taught my graduate course on soils. I took several courses that involved soil -- including an independent study -- but soil was the entire focus of a course I took with him. Since he earned his degrees in Minnesota (home of a certain prairie-themed radio program) and I was studying in a place where an entire economy of corn, soybeans and pigs was supported by the soils created by relict prairies, this biome loomed large in his lessons.

The biodiversity of prairie grass is an adaptation to the high variability of available moisture in the regions where it is found. The above-ground expression of particular grasses and other herbaceous plants fluctuates according to the conditions of a given season in terms of precipitation, temperature, fire, and mold, but a great deal more diversity is stored primarily in the roots. The roots are constantly exchanging carbon compounds with the surrounding soil. 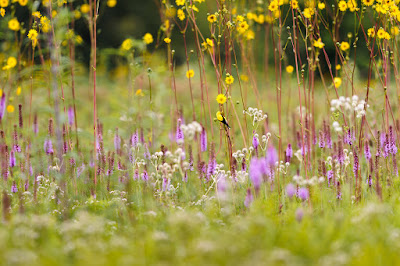 Prairie grasses both create and rely on rich soil, with a relatively high percentage of organic matter and often exhibiting very deep upper horizons. It can be argued, in fact, that the United States enjoys a favorable balance of trade only to the extent that we are able to grow crops on the soils that were bequeathed us by the largely abandoned prairies of the Midwest and Great Plains.

So it was with more than the usual interest that I recently read Grasslands among the best landscapes to curb climate change, Bekah McBride's overview of recent research at the University of -- wait for it -- Wisconsin. I found her article a bit too late in the latest semester of teaching my Land Protection course, in which we discussed the ecology and climate-change relevance of both temperate and tropical forests in great detail, with inadequate attention to prairies. I will be including this post for use in our discussion of a land transaction that helped to create the St. Croix National Scenic Riverway on the Wisconsin-Minnesota border, which I enjoyed briefly on a drive between the two states many years ago.

A recent study in Germany found that fields of solar panels (PV or photovoltaic) are associated with relatively high biodiversity. The word "prairie" does not appear in the article, but this seems to be the vegetation type favored by managing lands for large PV installations. Mowing is very infrequent, but must take place just often enough to prevent succession to woodland. The result is a much more diverse grassland than typically found in populated areas.

Posted by James Hayes-Bohanan at 3:49 PM

Email ThisBlogThis!Share to TwitterShare to FacebookShare to Pinterest
Labels: GEOG332