I am not fond of college rankings -- the U.S. News lists keep university administrators running from pillar to post trying to game the numbers, and bragging about all the wrong things if the rankings tilt in their favor.

But a recent headline from Brazil caught my attention, and gives me an excuse to make the case -- again -- for public higher education in general. The statement, shared online by various Brazilian friends, reads Entre 20 melhores universidades do Brasil, 18 são públicas. I am not sure why this is major news in Brazil, because public universities already carry the most prestige; the statement reads. "Among the 20 best universities in Brazil, 18 are public." 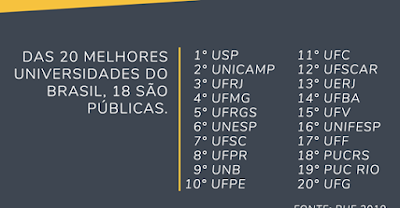 Most of these universities are federally funded; a few are funded by city or state governments. As I rightly guessed from the headline, the only "private" universities on the list are at least nominally Catholic. Number 19, for example is Pontifícia Universidade Católica do Rio de Janeiro, pronounced POO-kee HEE-oo.

To my knowledge, all university acronyms have a distinct pronunciation that is widely known. My friends at the Federal University of Rio Grande do Sul can pronounce UFRGS at UHR-geese without hesitation. Likewise, the main rivals -- and sometime partner -- of my friends at the University of the State of Santa Catarina (UDESC or oo-DESK-ee) are across town at UFSC (OOF-skee), the Federal University of Santa Catarina. At the top of the list is USP (OOS-pee), funded by the city of São Paulo and a leading winner of grants from many sources.

What the major universities have in common is relatively low faculty pay (some of my friends parlay the prestige of public-university sinecures into better-paying side gigs at private colleges) but even lower tuition. If fact, public universities charge ZERO tuition and no hidden fees. The only payment students make to the universities is the fee for the vestibular, the departmental entrance exams that serve as the vestibules to public higher education.

Here is the tricky part, though: Brazil is far ahead of the United States in honoring public higher education. The fetishes of Grover Norquist have been gradually reducing funding for our universities, with xenophobic migration policies reducing the pool of international applicants for our programs. But in Brazil, support for public universities is not simply about enlightenment: it is in fact the epitome of enlightened self-interest.

That is to say that the entrance exams do create a kind of meritocracy in which students of modest means can qualify for a free education (except room and board and the opportunity cost of not being fully employed while in school). On its surface, the vestibular system is objective. If 30 seats are available in a geography department, the students with the 30 top scores on the geography exam get admitted to that department. (Changing majors is not a thing in Brazil.)

But that is only on the surface, of course. The reality is that the children of those with higher income and more education are likely to score better on the vestibular than are their less-connected peers. In fact, it is common for the wealthy to invest in tuition for private primary and secondary schools, with the expectation that this will allow them to have their offspring educated at public expense at the university level. In effect, public higher education represents a net transfer of wealth from the poor to the rich.

Brazil's former president Lula -- himself with only a fifth-grade education -- spent considerable political capital in trying to reduce this tendency, but setting quotas for low-income or minority appliands. This is -- to say the least -- highly incongruent with Brazil's recent embrace of more conservative (nay, authoritarian) politics. It will be interesting to see how public higher education fares in the days of Bolsonaro.

Posted by James Hayes-Bohanan at 11:16 AM

Email ThisBlogThis!Share to TwitterShare to FacebookShare to Pinterest
Labels: GEOG381