Scholars Jacob Bradt and Carolyn Kousky recently analyzed the most recent data on flood insurance claims in the United States in studies published by the Risk Management and Decision Processes Center at the Wharton School. Claims vary considerably from year to year (they call the data "spikey"), but claims have been increasing. Moreover, the average value of each claim is increasing dramatically. As with any good business-school presentation, this graph of claim values is already adjusted for inflation. That is to say: more damage is being done by floods in real terms. 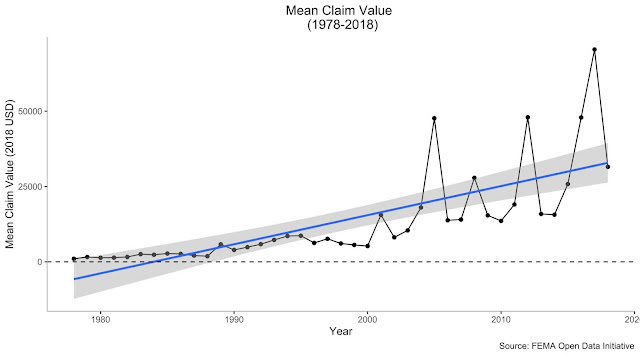 I learned of this study from the notes published to complement the following radio segment, which I recommend highly. In just four minutes, NPR journalist Rebecca Herscher conveys the implications of this trend in both personal and policy terms.

As her reporting illustrates, the rising cost of claims is putting increasing pressure on the mitigation efforts of the federal government. For decades, the Federal Emergency Management Agency (FEMA) has sought to reduce flood damage through mitigation: simply purchasing properties considered particularly vulnerable to flooding.

As the number and value of properties actually damaged by flooding increases, so too does the cost of meaningful mitigation. The focus of the story is on the increasing importance of funding of flood mitigation by state governments, as they realize that FEMA funding is not keeping up with the increase in damage resulting from land-use patterns and climate change. As I wrote in Climate Foxholes back in 2013, climate denial is not an option for those with real-world responsibilities such as planning and insurance.

Much of my writing on this topic has been inspired by the painful experiences of flooding in Ellicott City, Maryland, a charming mill town just a few miles from the campus where I became a geographer. My 2018 post Not in the Cards post includes the most direct explanation of the changing math of assessing flood risk; my more recent Dam Shame post includes links to each of my Ellicott City posts and a link to the recovery efforts of celebrity chef Gordon Ramsey.

Herscher reports from two states where I have lived -- Virginia and Texas. The water official she interviews in Texas has both a great Texas accent and a fun aptronym.

Career tip: if all of this mitigation work sounds like a job for geographers, that is because it is. A few years ago a student enrolled in our department because of her background in public safety and her  interest in emergency preparedness. She is now one of many geographers working for FEMA. As the NPR story suggests, there will be increasing need for geographers in similar agencies at the state and local level.

Posted by James Hayes-Bohanan at 6:40 AM