I recently posted an article connecting the bikini to the geography of coffee shops, but of course there is another Bikini, with its own geography: the Bikini Atoll. The connection between the two is an historical accident, linking the exuberance of post-war sexual liberation in Europe with post-war nuclear paranoia in the U.S. and resultant calamity in the Pacific. According to Zachery's bikini history, French engineer Louis Réard was four days away from the debut of his daring new swimwear in Paris, when a nuclear explosion in the Marshall Islands made "Bikini" the hottest word on the planet.

Réard and countless others have profited from the catchy name, which vaguely suggests "two-piece" and which will forever connect sensuality and apocalypse. The video above shows the incredible destruction unleashed upon Bikini Atoll during Operation Crossroads, the first of 66 or 67 nuclear-weapons tests carried out by the United States in the Marshall Islands, of which Bikini Atoll is one province. Unlike many of the tests that we conducted underground, some of these tests eliminated entire islands.

Jack Niedenthal is a former Peace Corps volunteer who now has dual citizenship in the Marshall Islands and clearly is passionate about the archipelago and its people. His Bikini Atoll web site is the definitive resource for learning about this intriguing place.

For example, the provincial flag is based on that of the United States, which held the atoll in trust at the time of its destruction. The 23 stars on the field of blue refer to the the remaining islands in the ring, with the three alone in the top-right representing Bokonijien, Aerokojlol, Nam -- three islands that were vaporized in a 1954 blast. The words are those uttered by the Bikinian leader on the day his people were asked to abandon their islands for the "good of all mankind" in the form of nuclear testing. Juda's words to Commodore Wyatt translate as "Everything is in the hands of God." Because our society's folly so completely uprooted Bikini society (some survivors and descendants have been resettled elsewhere in the Marshall Islands; others are scattered throughout the world), we owe it to them to learn their story. Mr. Niedenthal has made that easy with his well-written and informative web site, which even includes a discussion of the possible return of tourism. He is both a cultural ambassador and a geographic educator, with a "basic facts" page that centers on a series of maps at progressively greater scales, so that the reader can grasp both the site and the situation of the Bikini Atoll and its remaining islands.

I should have included maps in the original post (Oct 27, 2010). Most Pacific archipelagos are difficult to represent cartographically because they include very little land spread out over vast areas of ocean. The Marshall Islands are a good example -- about 70 square miles of atolls are scattered over close to 750,000 square miles of ocean. That is as if Washington, DC were divided into 29 large tracts of land and a few thousand small ones, and then scattered over all of Alaska. 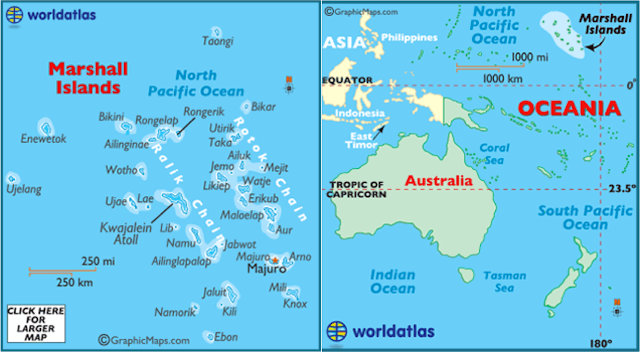 Learn more about the Marshall Islands at WorldAtlas.

Nearly 60 years after the last nuclear tests over these islands, journalists Zoë Carpenter and Sarah Craig tell the story of the Marshall Islands from the point of view of Marshallese who migrated to the United States, particularly to Enid, Oklahoma. Akin to the victims of the Tuskegee experiments, residents of the islands were involved in a catastrophic, unregulated experiment without their permission. Despite some token gestures of restitution, many continue to suffer poverty and ill health. The photo essay on Narratively describes those effects and the efforts to help from both inside and outside the migrant community.

Posted by James Hayes-Bohanan at 8:30 AM