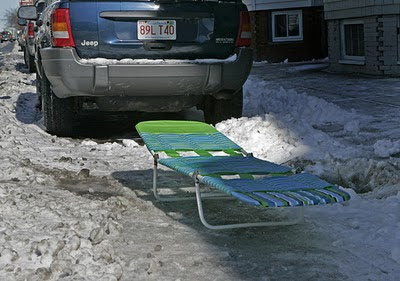 Commonwealth magazine editor Paul McMorrow begins his column in Sunday's Boston Globe with the observation that South Boston has a well-earned reputation for being obsessed about parking. This is true, and all the more profound in that South Boston stands out in a country that is obsessed with parking. This is a country, after all, in which one can get run over by someone trying to dart in to the closest parking spot at a gym, in order to reduce the amount of walking to and from the workout.

The photo above is a file photo used in a 2008 story about the seizure of 220 placeholders in South Boston that were clearly illegal but to which people felt entitled. Actually, they are still legal within the first 48 hours of a storm, a compromise with tradition that would not be tolerated in many other cities, even in the U.S.

It is in this context that McMorrow bravely suggests an area of the city in which available parking should be reduced. As his title "Minimize parking, maximize the city" suggests, in certain places -- even certain places in South Boston -- the space devoted to cars is keeping out something else. He refers to the waterfront, where parking lots are more abundant, and where developers and city planners agree that minimum parking requirements no longer make sense in some urban settings. In fact, he suggests, if appropriate infrastructure is provided -- such as bike trails, bus lines -- parking minimums might eventually be replaced by parking maximums. The unwritten subtext is that rising prices of gasoline are helping to push us -- at least in some circumstances -- away from automobile dependency.

As explained in Joel Garreau's Edge City, automobile dependency has been a vicious cycle over the past half-century, pushing the urban fringe to previously un-imagined distances from the urban core in many U.S. cities (and worldwide, as our worst habits have become so attractive to others). As we spread out, we needed cars to get around, so we devoted more space to them. As we devoted more space to cars, we tended to spread out more. In systems analysis, this is positive feedback, but such loops are never infinite; in the case of automobile-driven sprawl, it appears we may be nearing a number of thresholds that will curtail the spiral.

Posted by James Hayes-Bohanan at 6:14 PM