I believe it was from Bob Mondello's review on All Things Considered that I first heard of Chris Rock's documentary Good Hair (IMDb listing includes trailers), and with that my first inkling that hair care among African-American women is an issue particularly fraught with risk and controversy. 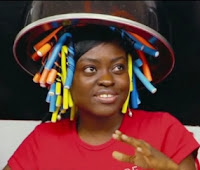 Mondello -- and many other reviewers -- see Rock (who is a comedian, after all), as treading lightly on the deeper meaning behind the trends that he describes. I disagree -- I think his demeanor is light-hearted, but he puts some important issues of identity and justice on the table in this film. I think he went to "Michael Moore school" for this project, by which I mean he does many things exactly as I would imagine Moore (my hero) would do them. The NPR producers, by the way, could not resist a little fun of their own, closing Mondello's review with a bit of the theme from the 1972 musical Hair.

The environmental geography of this film includes the caustic nature of the chemicals needed to straighten hair that naturally forms tight curls. Rock asks a chemistry professor about one of the most commonly used compounds, and the chemist appears astonished to learn that it would be directly used by humans. The implications for human health and the environment are dramatic, particularly among those -- men and women -- who keep the straightener in their hair until they can no longer withstand the pain it causes.

The cultural questions are at least as important. Do African American women really eschew natural hair styles as much as the film implies? If so, do the reasons have to do simply with aesthetics, or is it a means of coping with racism at some level, whether explicit or implied? The word "nappy" is used throughout the film with only a mild suggestion that the word -- or any particular hair texture -- is transgressive in any way. But it was only a couple years before this film that the word was part of the slur with which Don Imus insulted the Rutgers basketball players.

In Good Hair? Hardly, Entertainment Weekly writer Alynda Wheat agrees with Mondello that the film is often funny and with me that it raises some important issues. She goes on, however, to raise several serious shortcomings, not the least of which is the fact that the show was driven almost entirely by men. This leads him, Wheat argues, to exaggerate the scale of the hair-treatment phenomena he describes, and to read too much into the choices African American women make about hair. At the same time, she faults him for not analyzing those choices carefully enough. Still, I recommend that Wheat's article -- along with the various critiques posted on the IMDb site -- be read and taken to heart.

Related, perhaps, to some of the sexism in the film is the absence (notice by my wife Pamela) of Rock's wife, Malaak Compton-Rock. This would not be noteworthy were it not for the fact that the film is supposed to have been inspired by Chris Rock's concern over how their daughters' hair might be treated. It seems odd that this led him all over the world rather than to his wife, who is after all an African-American woman, the main subject of the film. Several explanations are plausible, two of which are that she has exactly the kind of long, straight hair that is the subject of the film and that her philanthropic projects include providing salon services to disadvantaged women. The third possibility is that rumors of their estrangement are true; it is sometimes impossible to tell whether celebrity couples have remained married in reality or only on paper.

I watched this film just as I was discussing race in my course on the geography of Latin America, in which I told students what I learned from a Brazilian professor years ago: in Brazil, hair texture quite often varies from person to person within a family, as does skin color, and is one very important aspect of defining racial identity. That same professor taught us that over the course of her adult life, educational attainment, economic status, dress, and make-up contributed to a gradual shift in how her own race was described on her identification papers.

Sesame Street muppeteer Joey Mazzarino had an experience similar to Chris Rock's when his young, African American daughter began to express a desire for longer, straighter hair. "Your hair is beautiful," he assured her, and wrote a little song for her, and put it on the show, sung by an unnamed Muppet with natural-style hair. As he recently told NPR's Melissa Block, I Love My Hair has become a far greater sensation than he could have guessed.

Clearly, Good Hair has struck a chord. There is something important about hair, and the conversations about it should continue. It is also clear that although hair may have special importance among African American women, the care and feeding of hair is important -- probably too important -- to many other people as well. The environmental and health risks of curl relaxer might be extreme, but it is not unique, as the Story of Cosmetics explains. Hair-straightener is far from the only cosmetic compound whose health and environmental effects are poorly understood.

Posted by James Hayes-Bohanan at 10:45 PM