Globalization and the Local Church

The Table is a non-profit organization of volunteers from throughout southeastern Massachusetts that has operated a soup kitchen in Brockton for 30 years. For the past several months, its leaders have been seeking a new location that would make its meals more accessible while also providing additional services to the community.

News from the Episcopal Diocese of Massachusetts is pushing the group to move sooner rather than later, as the 117-year-old church that has housed The Table is about to close.

So, what does this story have to do with globalization? Globalization is a process that has unfolded over centuries, particularly since the expansion of European empires about five centuries ago and most especially since the acceleration of technological change in the past generation or two. The most robust definitions recognize the role of communications, transportation, and institutional change in fostering an increasingly complex web of global connections.

An important thread running through all these changes is the extension of the tentacles of the world space-economy; the penetration of global capitalism into every nook and cranny of human and physical geographies. This has led steadily to the commodification of relationships that previously did not involve money. Direct relationships between people and the land are replaced by commercial relationships, as subsistence farmers become customers. Relationships of generalized reciprocity -- in which members of a family or clan or village care for each other without tracking the details -- are replaced by relationships of exchange.

And apparently, even a church can become so fixated on money that the vicar of St. Paul's actually wrote of her own church:


Episcopal churches do well in affluent towns and suburbs. Brockton, at present, is too poor and its residents struggling too hard to make ends meet, to create here an Episcopal church like the ones that now exist elsewhere in the Diocese of Massachusetts.

This assertion goes beyond ordinary stewardship of the church's resources by identifying believers more strongly with their socio-economic status than with their faith. 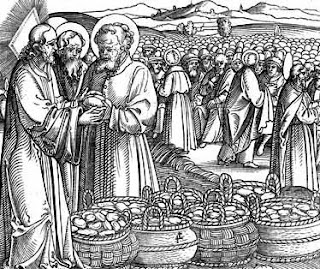 While looking for a nice image of Jesus feeding the multitudes to contrast with this story, I had the great fortune of finding the blogger Prairie Preacher. His article What Would Jesus DO? is directly relevant to the topic at hand, and just skimming his February 2008 archives makes me want to read more of what this genuine Christian has to say. His is a refreshing voice at the end of a tough week in which some of my own social-justice projects have been running aground on the MONEY TALKS gestalt of this era.


Posted by James Hayes-Bohanan at 9:25 PM