Ciudad Juarez was once one of my favorite places. Many years ago, I read Tom Miller's On the Border, about a journey in which he traversed every border crossing, from Tijuana to Matamoros, from Brownsville to San Diego. After years living in the Gasden Purchase section of Arizona -- where my wife Pamela actually got to work with Tom on one of his books --  and in the southmost tip of Texas, I realized that I had been through most of the border crossings. Los Ebanos with its hand-drawn ferry was a favorite, but so, too, was through the Chamizal Peace Park between El Paso and Ciudad Juarez.
Almost all of the cities on the Mexican side of the border are bigger than their U.S. counterparts, and Juarez is no exception. It is the largest border city in the world, with 2/3 of the population on the Chihuahua side. Despite its sprawling size, I enjoyed several visits in the 1990s, and walked around comfortably in the sunshine and even in the evenings. In those days, even the crossing back into the U.S. was simple and easy. 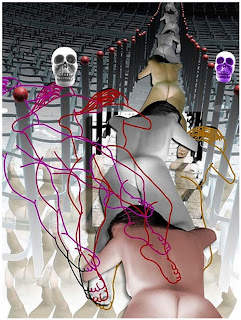 In the 13 years since we left the borderlands, Juarez has become a tragic place -- one of the few I would rather not visit for a while. Jennifer Lopez has told the story -- at some risk to her own safety -- in Bordertown. I highly recommend both the fictionalized account (see trailer) and the DVD extra feature that explains how the film came to be made. The otherwise infamous narcocorrido singers Los Tigres del Norte told the story in the CD Pacto de Sangre. Both of these refer to the hundreds of young women who have been kidnapped, raped, killed, and left in the deserts surrounding Juarez over the past decade or more. Many of them have been attracted to the area for maquila manufacturing jobs, working long hours for low pay in factories that do not provide them adequate protection. It is thought that a conspiracy among very elite men is responsible for the failure to solve these crimes -- about two thousand women who have disappeared. The image at left is from a blog post called ¡Feminicidios sin resolver! -- one of many that expresses outrage and sorrow about the loss of innocent young lives in this once beautiful city. This particular image is remarkable for the way it integrates motifs representing femininity and veneration of the dead at one level, along with representations of crime scenes and of the border itself. The accompanying narrative is focused on the fact that many of the victims were killed going home from jobs that they were far too young to hold legally.

Pam reminded me that the first time we heard about the Juarez killings was through a performance of Eve Ensler's Vagina Monologues (an important program that is put on each February at BSU). Each year, the VDAY show focuses on a cause, and in 2004 the women of Juarez were that focus. One of the monologues, The Memory of Her Face, honors women victims of violence in Islamabad, Baghdad, and Ciudad Juarez, with a stanza of the reading representing a woman in each of these cities in which violence against women has become a consequence of wars -- declared and undeclared. Read more about the Women in Juarez Spotlight and about the 5,000 shows performed in Mexico City in support of Juarez women (second item on this news page).

In the past couple of years, this already tragic and violent story has gotten much worse -- probably ten times worse. The murder rate in Mexico as a whole remains relatively low, in part because firearms are very difficult to procure. But the murder rate in Ciudad Juarez has become much higher, as it has in other border towns. The reason: the Sinaloa drug cartel, which formerly operated with impunity throughout the northwest of the country, is in a battle over territory with a group called the Zetas in the northeast. I met a few of the Zetas during an inspection stop near Monterrey in the 1990s, when they were legitimate narcotics police. They eventually cooperated with the Gulf Cartel, and still later took it over. Now shootouts are so common in Matamoros, across the river from my former job at UT-Brownsville/Texas Southmost College that the campus has actually been hit by stray bullets.

Borderland journalist Charles Bowden describes the killing in Juarez in his book Murder City, which is at the same time compelling and unbearable. He explores the dynamics I outline above, but goes beyond this to put the brutality in the context of even larger forces related to economic exploitation. He discusses his claims -- and explains why he keeps going back to Juarez -- in an interview with NPR's Mary Louise Kelly that was recorded after three people affiliated with the U.S. consulate were killed last April.


I argue, with Bowden, that  is not possible to understand violence on the border without acknowledging the transformation of the border itself from an edge situated within a bicultural zone of transition to an increasingly impersonal sieve that separates humans from their labor. It is also not possible, however, to understand death along the border without understanding the distinctive attitude toward death in Mexico, as exemplified by the Dia de los Muertos. November 1 is a colorful holiday -- as suggested below -- in which the dead are honored, celebrated, visited, and consulted.

As reported last spring in a fascinating article in National Geographic, the increasing brutality of the drug war has created a class of wealthy and youthful criminal class who are full of both bravado and fear and at the same time increasingly status-conscious. In this context, graves -- while always important -- have become sites of obsessive competition among traffickers. The focus of the article -- Troubled Spirits -- is on the veneration of Santa Muerte, literally Saint Death. Even in the panoply of images that embrace the figure of the skull, the imagery of Santa Muerte is remarkably chilling. Whether standing in a gown in a tiny living room or being carried on the shoulders of mourners at a gangster funeral, figures of Santa Muerte are arresting. Although not sanctioned by the Catholic Church, Santa Muerte is an increasingly important object of adoration and supplication, as traffickers seek both protection and riches through her. And although many assume Santa Muerte to be a very recent phenomenon, at least one Hoodoo practitioner claims several generations of veneration of Santa Muerte.

Posted by James Hayes-Bohanan at 6:35 AM