One That Got Away

Followers of this blog know that my interest in coffee began with economic and environmental conditions of the coffee trade, but eventually grew to encompass the beverage itself and the coffee shops that so often become the hubs of local communities. For the past several years, in fact, students in my coffee seminar have been charged with bringing me stories about coffee shops, and last spring we started putting those stories on a dedicated Yelp! channel for my students (to complement the Yelp! channel that carries my own reviews.) 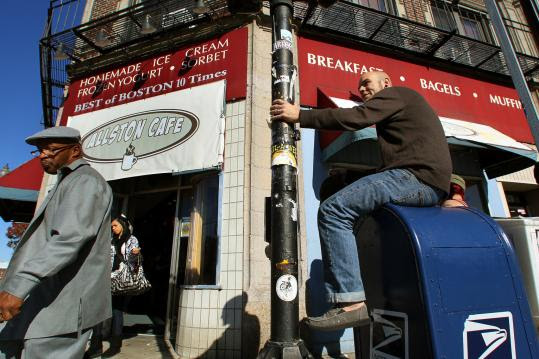 From today's Boston Globe I learned of a shop that did not come to my attention in time. The Allston Cafe, in the eponymous neighborhood of Boston, served its last customers this week, some with tears in their eyes. As is always the case with the best coffee shops, regulars -- such as "Mail Box Mike" above -- helped to make the business what it was.

Owners Page Masse and Derek Brown faced steadily-increasing food prices and rapidly-increasing rent, as their landlord attempts to profit from a planned expansion of Harvard University in the neighborhood. They hope to re-open nearby (with a more humane landlord, it is to be hoped). If they are able to do soon enough,  their loyal customers might just enable them to re-create some of what has been lost. If it happens, I plan not to miss it next time!

Posted by James Hayes-Bohanan at 6:56 PM