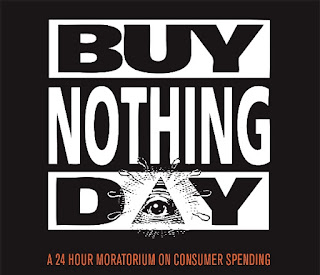 I am happy to say that I have never stood in the pre-dawn cold, waiting for a store to open. For many years, in fact, my (immediate) family has done no shopping at all on the day after Thanksgiving. What others call "Black Friday" we have called "Buy Nothing Day." We did make an exception to buy medicine for our daughter once, but we take this pretty seriously, making sure on Wednesday that we were prepared to avoid buying anything for the rest of the week. (For those confused by the term: it refers to the idea that businesses would reach profitability on this date, moving from "in the red" to "in the black" as sales grew, with sales for the rest of the year representing annual profit margins.)

This is, in fact, a movement that has now been around long enough that the original posters are called BND Classic. We knew it was a major movement, but it was not covered much, and we heard relatively little about it from our friends or colleagues. Even NPR, which prides itself on independence from advertising, we can count on a flurry of reports about shopping on this holiday weekend, with little, if any, mention of those who are purposely opting out.

We did notice, however, that the day after Thanksgiving is no longer the busiest shopping day of the year -- despite all the hype -- and we were thinking that people like us might be part of the reason. Of course, a bigger factor is the growth of online shopping, of which we do a fair bit (but not on Thanksgiving or the day after). Again, NPR and other media have focused on every possible cause except for the Buy Nothing Day movement.

Today I received a message from Heifer International, mentioning that the Black Friday haul probably exceeded $10,000,000,000, and suggesting an alternative way to give gifts. We have enjoyed giving and receiving Heifer International gifts over the years, and I recommend it as the perfect gift for people who already have everything they need (which is myself and most people I know, honestly).

This year, it seems to be different. We have heard more this year than ever before about people choosing not to participate in "Black Friday." We think this is something more than the usual, echo-chamber effect of surrounding ourselves with like-minded people. As people in the United States are just beginning to believe that an economic recovery may be occurring, it seems that more thought is going into purchases -- not only in terms of household solvency but also in terms of the broader implications of consumerism. I am especially proud -- and encouraged -- to see this thoughtfulness among my university students. In fact, one of my former students contacted me for more information on the movement, remembering that I had mentioned it when he took my class years ago.

We spent the Thursday holiday with friends, cooking, sitting by the fire, and enjoying great food -- much of it local -- and conversation. (In one concession to what has become the mainstream pursuit of the holiday, we were in a house with television, and did not completely ignore the football games.) We spent Friday doing not much of anything. Then we spent Saturday taking a pleasant drive to the South Coast and supporting several local and regional businesses on Small Business Saturday -- a new and welcome tradition.

We learned of the day from a local small business, the Rockin' K Cafe in Bridgewater, whose owner went out of her way to promote other local businesses to her regular customers. I have found that a lot of local business owners, especially cafe owners, are keen to support one another -- yet another way in which a local coffee shop can be the heart of a community. What surprised us was that Small Business Saturday has has a major corporate sponsor: American Express. We bought some pet supplies from a pet store just a couple blocks from our house. It does not have the volume to match the prices of the big national pet stores, but we frequent this store because of the proximity and the terrific service that has often been quite helpful to us and our menagerie. 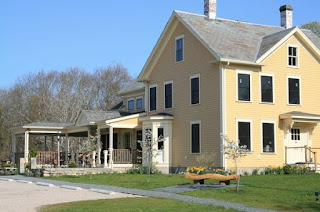 Stretching the definition of "local" just a bit, we drove south to Westport, a town that really values its local businesses, particularly those related to agriculture. The main attraction was an open house at Westport Rivers, a vineyard where several of the staff recognize us on sight. Hmmmm. Seriously, it has been our privilege to support a winery that not only takes care of its own land and product so well, but that also supports many other local businesses, from suppliers for its excellent dinners to exhibitors at its public events. In this case, we were introduced to Golden Touch Farm, which sent its darling alpacas over to the vineyard. We are now the proud owners of a lovely alpaca basket and some truly amazing wool socks! We were winding our way home from the open house (and warming up from a brisk hayride through the 90 acres of vines), when we remembered another great business in Westport: Partners Village Store and Kitchen. We enjoyed a light lunch and bought some lovely gifts there.

We started to fantasize about retiring to a community that is part of a "Farm Coast" region that is very focused on the protection of open space and the promotion of healthy, local food. Unfortunately, retirement is a long way off, and this kind of community has become so rare that it is actually quite expensive to live there, so for the foreseeable future we will continue to work with our neighbors to try to help Bridgewater live up to its potential. The most selfish and narrow-minded interests have had the upper hand for decades, but we see some signs of hope in local efforts to promote fair trade, land protection, civic involvement, neighborhood improvement, and social justice.

Posted by James Hayes-Bohanan at 11:36 AM