Most years, I do not attend the annual meeting of the Association of American Geographers, preferring the lower-key, familiar regional meetings, which I have attended in several North American regions. I attended in 2010 when it was held in my home town, mainly because we had the opportunity to bring EarthView to the meeting.

This weekend I have attended the national meeting in part because I missed our regional meeting in Montreal and in part because it is reasonably close -- a pleasant train ride away in New York City. The main reason for the decision, however, was an invitation from a geographer I have never met but whose writing I have greatly admired. Professor Sarah Goggin and I are both contributors to Geo Hot Topics, an educational blog maintained by Wiley publishers. We share a strong interest in helping people to understand the power of geographic thinking, so when she invited me to join a panel on geography education, I was both honored and convinced that this would be a good use of my time. 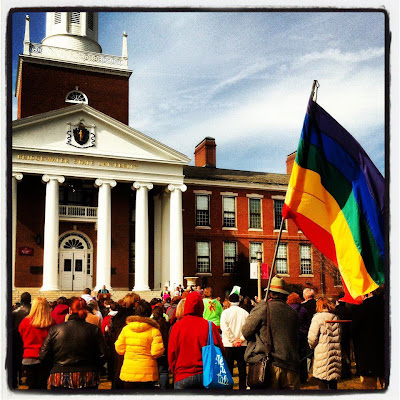 The session, entitled Geography and Diversity, met this morning, and was followed by another session by the same title. Sarah chaired both sessions, which were distinguished by their subtitles -- "Showcasing 'Diversity Discipline' among Administrators and Interdisciplinary Campus Colleagues" was followed by "Teaching to Cultural and Learning Diversities in the Lower-Division Geography Classroom." In other words, we began with a discussion of how to champion geography as a way to promote the diversity aspirations of our colleges and universities, followed by a discussion of how that actually plays out in classrooms.

We decided to spend only a few minutes discussing the article, deciding that A Diversity Discipline is more appropriate, even if we are tempted to think we represent The Diversity Discipline. All kidding aside, these were two very valuable sessions.

I chose to open my remarks with the photo above, taken just a few days ago. When a student on our campus was attacked -- apparently by fellow students -- for an editorial she wrote in support of same-sex marriage, the campus rallied, defending the right of members of our community to be who they are and to express their views freely. The response exemplifies the value of social media -- a well-attended, well-covered event was organized over the course of a holiday weekend -- and the many ways in which geography and geography students are deeply involved in multiple discourses on and around our campus. Defenders of free expression and individual dignity included people from many disciplines and backgrounds, which was the true beauty of the event. As one of the student speakers later suggested, however, geography was very well represented! 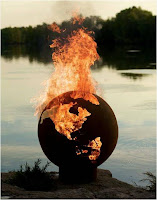 I spent some time discussing the legislative and networking efforts of our Massachusetts Geographic Alliance, which in many ways parallel national efforts. At long last -- in my view -- the Association of American Geographers is creating more effective messages about the contributions of our field, and is working with a variety of partners on a national legislative approach that has great promise.

We also discussed the passion for learning geography that we find among our own students and among the thousands of younger students we have reached through Project EarthView. At the conclusion of my remarks, I shared a photograph that had just been shared with me by one of our majors. It represents a passion for learning about the earth; its simplicity belies the complexity of the relationships we know each globe represents.

Posted by James Hayes-Bohanan at 5:38 PM