Scale: Coffee's Place in the Universe

Scale is an important concept in geography, as it is in other fields, from biology to physics to chemistry to architecture. We take the EarthView globe to schools primarily because it provides such an unusual "projection" -- a map of the entire planet seen without distortion and from the inside -- but being large enough to offer this perspective necessarily means that it is  also a globe of unusually large scale. Each unit of measure on EarthView represents about 20 times the the distance represented by the same length on a typical classroom globe. This means that any shape represents about 400 times the surface area that it would on a classroom globe, and that EarthView has about 8,000 times the volume of that typical globe. This is one of the subjects I cover in my Pi Day EarthView post. 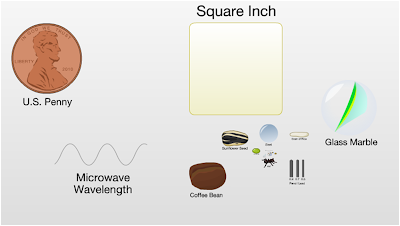 These differences are impressive, but they are only one order of magnitude different (that is, in the range of one decimal place, more or less). In reality, we now know of objects dozens of orders of magnitude smaller than the smallest things we can see, and astronomical distances many orders of magnitude larger than our galaxy. Cary Huang has captured these vast differences in scale in a beautiful animation that is simply called The Scale of the Universe 2. I love that among the many objects selected for comparison is the coffee bean. Use the slide bar to change scale at will, and be sure to click on each and every item from the subquarks to the galaxies and beyond, to learn something about scale, scientific notation, science, and Huang's sense of humor!

Oh, and the animation plays nice music, too.

Posted by James Hayes-Bohanan at 2:35 PM