The Mexican poet Octavio Paz famously lamented: "Alas, poor Mexico! So far from God and so close to the United States!" The Valentine's Day fire killing hundreds of prisoners in Comayagua, Honduras suggests that the smaller countries of the region are imperiled by proximity to both Mexico and the United States. 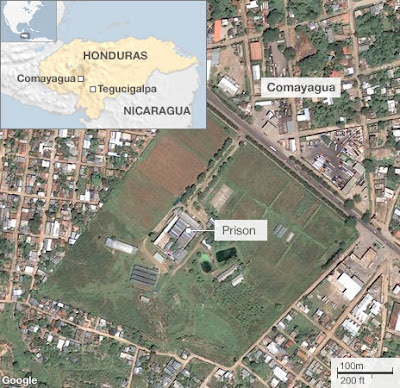 As I wrote last March, President Obama has joined a century-long, bipartisan succession of U.S. Presidents who care little about how U.S. policies affect the people of the region. During the 2009 coup in Honduras, Brazil did far more than the U.S. to uphold due process, and our failure ultimately enabled for the presidency to be stolen.
As both the BBC and NPR have reported, a culture of police violence has grown in Honduras, and the implicit support for the coup is at least partly to blame. The cause of the prison fire at Comayagua is as yet unknown, but it is already known that close to half of the prisoners died, many of them in cells to which no keys could readily be found. In the aftermath, violence erupted between police and relatives of prisoners.

I have written a number of stories on this blog about the drug-related violence gripping Mexico -- including many border areas that I once enjoyed visiting regularly. I have tried to make the case that in many ways, what has befallen Mexico is that the most difficult parts of the U.S. "war on drugs" have been outsourced to Mexico, just as surely as we have outsourced low-paid manufacturing and its attendant misogyny and violence. The BBC reported more than a year ago that Mexico's efforts to quell drug-related violence were, in  turn, pushing the cartel battles into El Salvador.
The same BBC article mentions that El Salvador in particular was already wracked by the export of gang violence from Los Angeles. Whenever possible, the United States deports violent criminals to their birth countries, even if they immigrated at two years of age and learned all of their criminality here. Blame for violence in Central America rests ultimately with the criminals -- in and out of uniform -- of the region itself. But much of the violence has roots in the United States and Mexico that must also be remembered.

In addition to the BBC coverage cited above, see the New York Times for details of the fire.

Posted by James Hayes-Bohanan at 12:22 AM