The title of this post references a special event taking place at BSU on Wednesday, April 18, entitled "Celebrating Freedoms of Expression and Being: LGBT Voices in the Latin American World." The program will be in One Park Ave (Rondileau Campus Center basement) from 5:00 to 6:30. Refreshments will be served, including Guatemalan coffee from Gay Coffee in Northampton.


I was thinking of this as an update of a program that Pam Hayes-Bohanan and I offered "a few years ago." Then I discovered that it has been nearly a decade ago that we last facilitated a discussion specifically focused on the lives of Lesbian Gay Bisexual and Transgender people and communities in Latin America. We are certainly overdue for a discussion of this topic, both because it has been a long time and because a lot has changed -- mostly for the better -- in that time.


This time our discussion will be based on a viewing of the abridged version of Tal Como Somos: The Latino GBT Community. The full-length version is embedded above for on-campus BSU users. Off-campus BSU users are prompted to logon for access, and others can seek the film through other libraries. Unfortunately, it is not on Netflix.

Notice that the "L" is missing from the common nomenclature in the title, as these stories include a variety of gay and bisexual males in the United States as well as a transgender female-to-male individual from Mexico, but no lesbians were included.

Aside from the film, we are going to discuss briefly Omar G. Encarnación's excellent article Latin America's Gay Right's Revolution, 2011, Journal of Democracy 22(2). Encarnación describes the varying levels of success in LGBT social movements in Latin America, and argues that where advances have been made, it has been the result of a combination of cultural, political, and legal factors. No single kind of causation -- such as a "spill over" effect of social movements in the U.S. and Europe -- provides a complete explanation in his view. 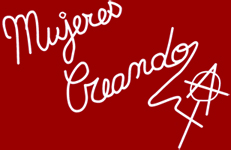 In addition to the developments described by Encarnación, we revisit one organization that we described in our 2003 presentation on this topic. We are glad to see that Mujeres Creando (Women Believing) is still going strong in La Paz, Bolivia.

Rejecting both machismo and what it calls the "gender technocrats" of mainstream feminism, this feminist/anarchist community provides a genuinely alternative voice for communities of women who traditionally have been marginalized in Bolivia and elsewhere. They have reclaimed a literal and figurative space in La Paz as both a "convent" and a "Quilombo" as they seek to redefine the subaltern positions previously occupied.

We conclude with a short essay by Hector Luis Alamo, Jr., who writes about the realization of "Being Latino, among other things." Identity is complex and diversity can be as great within communities as it is between communities. Alamo writes from the heart about both the compounding of subaltern identities and the difficulty of overcoming discrimination among those with whom one shares a struggle one moment, and faces a struggle the next. Activist Keith Boykin explored similar themes in his recent visit to BSU as keynote speaker at our Rainbow Luncheon (which I had to miss this year).

Additional resources from recent literature include:

Edwards, Cristóbal. 2008. "The Gay Map of Latin America." The Out Traveler. Regent Media. Available as text-only from The Free Library.

Thanks to librarian extraordinaire Pamela Hayes-Bohanan for these resources. Find much more at the GLBT and LACS MaxGuides, resources she maintains for research on the subjects that overlap in this discussion.

Posted by James Hayes-Bohanan at 7:01 AM