(Please see geographical correction at the end of this post.) 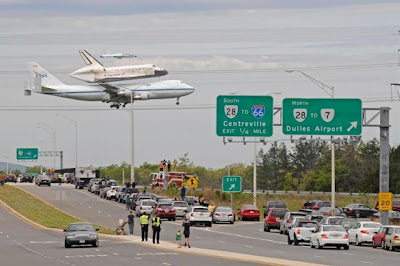 Yesterday I mentioned my own family's experience with eminent domain as part of a post about the Keystone XL pipeline. When discussing the situation with my students, I mentioned that my grandparents' house (in which I had lived as an infant) was in the direct path of one of the main runways at Dulles International Airport. Growing up we learned how to pause a conversation while a 747 flew over, close enough to see the landing gear spinning. The Concorde SST was not as loud, by the way, as it was not permitted to fly at supersonic speeds over land.

As I also mentioned in class, the family property was taken around 1990 to make room for a cloverleaf, necessitated in part by airport traffic, but more generally part of the suburban sprawl that spreads out from the nation's capital. It is that very cloverleaf that is featured in this photograph -- taken on Patriot's Day yesterday -- of the delivery of the Space Shuttle Discovery, which is being housed at the Smithsonian National Air & Space Museum. My grandparents were so upset by the forced sale of their property that they never used this cloverleaf, though they spent their remaining years living just a couple miles from it.

A couple of notes about the photograph: First, seeing a 747 Jumbo Jet in this position is not at all unusual. In fact, we learned that some pilots would do an unofficial, visual check of the family home to confirm their final approaches. It would, however, not be common to see a space shuttle and an F-16 in the same frame. Second, the "South 28" exit ramp is the one responsible for taking the family homestead. Third, that homestead would be located directly below the landing gear as shown in this photo.

One last family connection: my Uncle Charlie -- from the other side of my family -- was the surveyor responsible for those runways!


UPDATE: My father looked closely at the shuttle photo above and realized that it could not have been taken from the point on Route 50 that my cousin and I had assumed it to be. Route 28 is an overpass at that intersection, though it is an underpass in the photo. The shuttle is actually shown crossing Willard Road, about 2/3 of a mile to the south. This means that it would have been even lower as it crossed Route 50!

Posted by James Hayes-Bohanan at 4:50 PM