This poster -- appearing in duplicate above a shop in Huaracondo, Peru -- is problematic on several levels. As with many uses of women's bodies to sell products, the product being sold has no direct connection to the woman being represented. The phrase at the top of the poster reads like a critique of the poster itself, but is played without irony: "the interior is what is important."

The poster is part of an overwhelming tendency -- described in the documentary Miss Representation -- to market not only products but also particular ideals of beauty. These messages are damaging enough when they are pushed too far within a given society. The damage is compounded when such representations are taken across borders. As with any country, Peru is sufficiently diverse that the woman in this poster could be representative of some Peruvian women. But it stretches credulity to suggest that she is broadly representative, and in the region where this poster was found, it is simply implausible. What messages are internalized by the Quechua women and girls who see these posters? Or by the men and boys in their communities?

The poster is also deeply problematic at the level of the product itself. In this case, the "product" is water. As purveyors of consumer products in the global core compete for small slivers of market share, the real money to made is in expanding sales into the global periphery. Cosmetic and hygiene products have been among the sectors that pursue this strategy most aggressively, followed by soft drinks and fast food. Though the multinational corporation behind this campaign is based in Spain, it is no coincidence that this poster is next to a Coca Cola sign, as the U.S.-based firm Coke has pushed its way into virtually every corner of the earth, often capturing local water supplies and undermining public health.

The Agua Cielo campaign goes a step further, and again the poster does not flinch from the insult it is inflicting, using the word "life" without regard to the fact that it is seeking to commodify a life-giving substance that should be a human right, rather than an object of trade. That substance of course is water. The poster suggests that by purchasing Agua Cielo -- Heaven Water -- people can actually elevate their lives (specifically, it reads "Elevate your life"). Research on ecological marketing in Peru indicates that this poster is part of the company's broader greenwashing strategies. In addition to health claims, these strategies follow two lines familiar to consumers in the United States -- co-opting NGOs into meaningless "alliances" and bragging about slight reductions in the amount of plastic used to deliver something that should be coming from the tap (see my Cochabamba post for much more on this).

The bottled water is -- as in the United States, including my own "green" campus -- marketed alongside soft drinks. The results include a greater consumption of plastic -- which is damaging whether it is recycled or not -- and an increased incidence of diabetes. 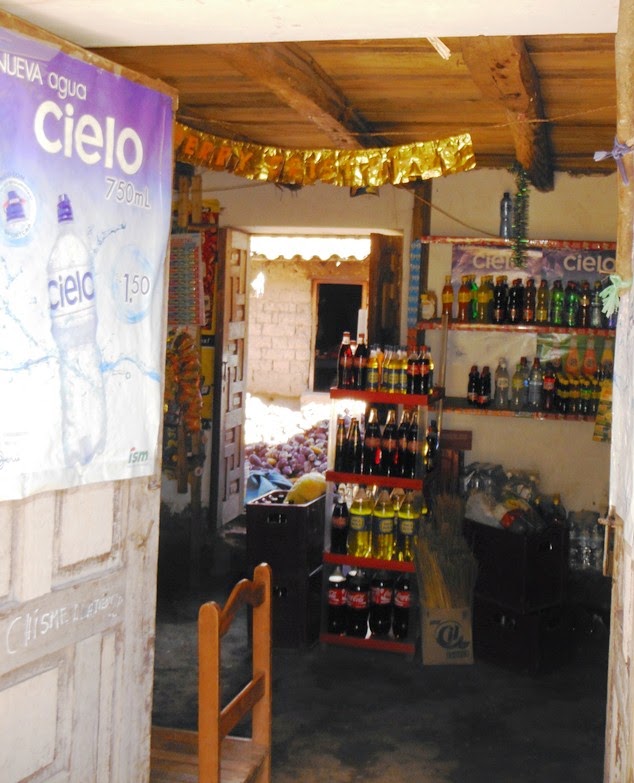 The most prevalent offering in this shop is artificially sweetened soft drinks. Whether the brand appears to be local or global, almost all soft drinks are now produced by global companies such as Coca Cola, and it is in large part through these beverages that commodity corn -- heavily subsidized by U.S. taxpayers -- is replacing local varieties. On the patio behind the bottled beverages can be seen local blue corn drying in the sun. Drying corn and the red flag for chicha remain common sight throughout the Sacred Valley of Peru, but aggressive marketing of bottled beverages is hastening the demise of sustainable, genetically diverse crop production.

Posted by James Hayes-Bohanan at 8:04 AM