Brazil is, of course, the most soccer-obsessed country on a planet full of soccer obsession. My first stay in Brazil was during the 1996 Olympics, so that football (aka soccer) was everywhere I turned, from local pickup games (I wisely opted not to join, probably saving myself some broken bones) to the usual national leagues to the Olympic games themselves, in which Brazil "only" won bronze. I learned that the word duration of an announcer's calling of the word "GOL!" was in proportion to the importance of a goal, and that if I heard it on my television -- or a neighbor's television -- I would hear firecrackers in the neighborhood in just a few seconds, in proportion to the number of Os in GOOOOOOOOOOOOOL!

It would seem, then, that Brazil would be a logical host for this year's World Cup, and it is in many ways. But Brazil is a country that is just beginning to make progress on serious issues of corruption and wealth inequality (Brazil is progressing as fast as the U.S. is regressing), so the HUGE public expenditures have led to considerable protest and even unrest.

It is in this context that Colombian superstar Shakira offers La La La. As the title suggests, it is not her most intriguing work in terms of lyrics. In fact, the song makes little sense to me, aside from the video. But with the lush visual performance, it is a great example of music as cultural geography. Specifically, it is an engaging exercise in corporeal vexillology. The comments section on YouTube shows that the video is sending people to their search engines in great numbers, all with the question, "What flag was THAT?" 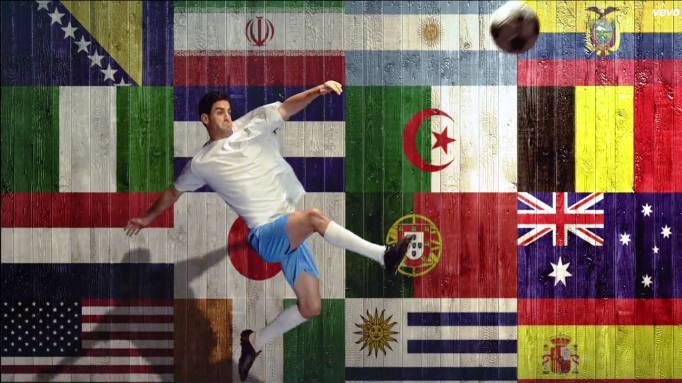 If you are as intrigued by flags as I am -- though I really frustrate myself by not being able to remember them -- have a look at all the vexillology entries in this blog and even more vexillology on EarthView, which includes some quizzes.

Posted by James Hayes-Bohanan at 8:44 AM