Coffee: Shifts in the Geography of Production

The International Coffee Organization was established by the United Nations to administer the International Coffee Agreement, by which producing and consuming countries used a series of yearly quotas to stabilize coffee production volumes and prices. Coffee is the second-most traded commodity on the planet (after oil), and wide swings in price and inventory had been seen as problematic for the industry itself and for the millions of people who earn their living as producers. The accord was in place from 1963 until 1990, when the United States withdrew, leading to the agreement's collapse. 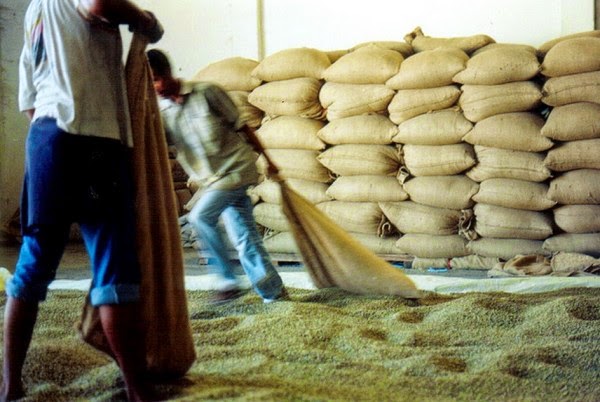 The organization has re-emerged in recent years. As before, it is an unusual association in that it includes producers and consumers. It does not regulate the industry as it did previously, but it is fostering cooperation on a number of problems that threaten coffee production, such as poverty among producers (despite the billions of dollars to be made) and climate change.

Among its projects has been the release of a comprehensive history of the organization and of its member countries. Roast magazine is publishing highlights of the report on its Daily Coffee News blog, beginning with A Brief History, which focuses on shifts in production between the Agreement and post-agreement periods. Angola, for example, was once the fourth-largest producer but now produces only 33,000 bags (though this is up from a scant truckload a few years ago).

Many countries within the tropics grow one or both kinds of coffee, but of course within each country -- even the smaller ones -- coffee has a particular geography and is not found everywhere. This map from the German Coffee Association was included in the Distractify article 17 Awesome Facts That You Never Knew About Coffee. (Of course, most of my students know at least a few of the 17!)
For those wishing to do further research on coffee -- particularly those in the BSU community, librarian Pamela Hayes-Bohanan has created the Coffee MaxGuide, a portal to all of the online and on-shelf resources related to coffee at the Maxwell Library.

Posted by James Hayes-Bohanan at 6:30 PM