This year is the sesquicentennial of what some consider the first modern geography book. In 1864, Vermont geographer and diplomat George Perkins Marsh published Man and Nature. It would take another century for such a title to be seen as sexist, but the subtitle was ahead of its time and recognizes both men and women as ecological agents: Physical Geography as Modified by Human Action.

Marsh was in his prime just as the American frontier closed, and he was among the first to recognize the paradox of Manifest Destiny. As outlined in the Schoolhouse Rock classic "Elbow Room," what passed for resource planning for the first couple centuries of European settlement in North America (and really in South America, too) was simply to keep moving west. It was widely accepted that God had ordained that we should occupy the entire continent, but it still came as a bit of a surprise when we actually did.

Marsh had extended stays in both Italy and Turkey during this pivotal period, and especially in the latter he began to realize what happened as human population grew in place: the land changed, and not generally for the better. This allowed him to see changes in his native Vermont more clearly. Humans were affected by nature, to be sure, but nature -- no matter how vast it might seem -- could be affected by humans as well.

To some degree, Marsh was successful, and he deserves some of the credit for the first round of environmental conservation measures adopted by the United States. Those efforts were not enough, however, to overcome more than two centuries of simply getting resources elsewhere when they became scarce. Expansion as resource policy had become so deeply ingrained that the country turned to Plan B, which was for the colony to become a colonizer. This was, of course, at odds with our revolutionary rhetoric, so we have spent more than a century in deep denial of our place at the center of a global empire.

I was thinking about Marsh and the scant century and a half since we really began to recognize the human capacity to disrupt ecosystems, when I learned of a new an iPad app from NASA, based on a series of images that depict changes of many kinds that are taking place in the earth environment. The changes are of many kinds -- including floodier floods and droughtier droughts -- and most point to a growing influence of humans on the lands and waters that sustain us.
I was drawn into environmental geography when I learned of one serious disruption -- tropical deforestation. It is the kind of change that Marsh would have recognized, though he could scarcely have imagined the speed and scale of that process.

Because the human population has grown about six-fold since Marsh was writing -- and the economy incalculably more than that -- these images depict changes that are beyond a scale that he could have imagined.

Not all change is visible, of course. The United States has recently -- and temporarily -- achieved what proponents call "energy independence" by the unregulated use of a new method of extracting fossil fuels. By shattering the earth's crust, hydraulic fracturing -- known as fracking -- makes available natural gas that was previously not economically viable to mine. Drilling companies displacing the environmental and social costs to neighbors and to the future, making a lot of money in the short term. The toxicity of ground water is one kind of invisible consequence; the seismic effects are another. As reported by The Guardian and others, the wastewater wells are causing a dramatic increase in the number of earthquakes. Defenders are in two camps -- those who ignore the data and those who now argue that since they are relatively small earthquakes, this is not a serious problem. 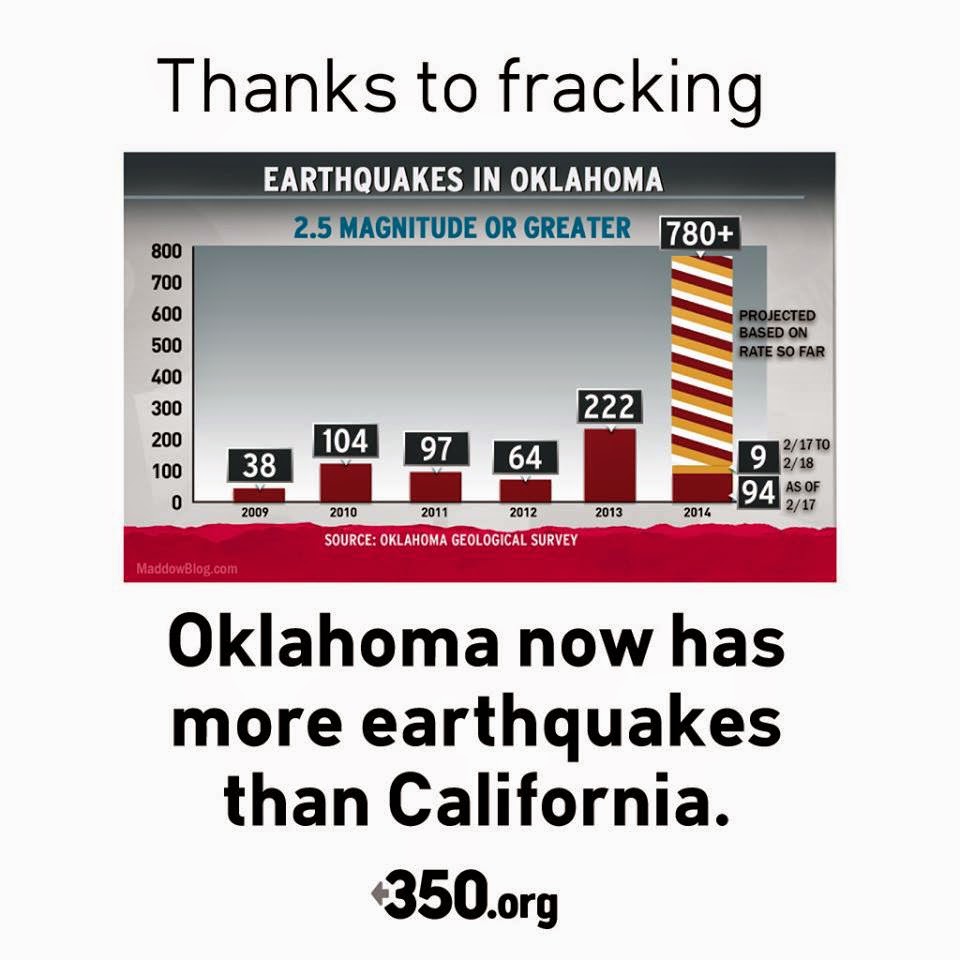 Posted by James Hayes-Bohanan at 12:23 PM