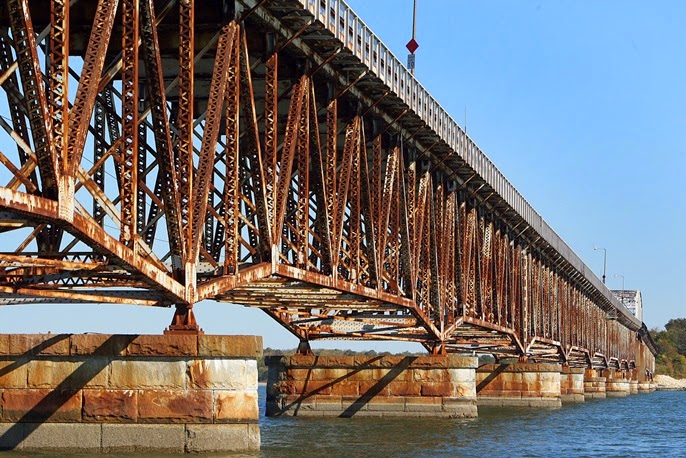 The day before pleading with the U.S. Olympic Committeeto bring the 2024 games to his city, Boston's Mayor Walsh announced that an alternative shelter had been found for the homeless people displaced by the sudden closing of this bridge in October. I recently wrote about this because it seemed to show a reckless disregard for the homeless people and other clients of social services on Boston's Long Island. Only this week did I learn just how severe that disregard had been. In its timeline accompanying the story, the Boston Globe describes the bridge's October 8 evacuation:

City engineer meets with MassDOT bridge inspection officials to seek guidance. The state experts are presented with documents showing that certain gusset plates have a "zero load rating" which means they cannot safely bear any weight. The city's consultant tells city employees that the bridge "needs to be closed immediately. This closure should happen by the end of the day." The city immediately begins evacuating the island -- using the bridge.

From the timeline I also learned contingency plans had included the ferry option that I suggested in my Short Shrift piece. Even before reading that contingency plans had been made but ignored, I was beginning to think of the Long Island story as Boston's Katrina. The evacuation in this case had no casualties, but the evacuees need not have been displaced at all. The city has spent two months trying to find the weakest NIMBY zones, and is pleased with itself for prolonging this ordeal only through mid-January.

When opponents of the Olympic bid argue that the money for the games would be better spent on schools, roads, and bridges, the apologists for the bid reply that the Olympics would "force" investment on infrastructure that might otherwise not be funded.

Given the failures -- so far -- at Long Island, this seems wishful thinking indeed.

Posted by James Hayes-Bohanan at 12:30 AM