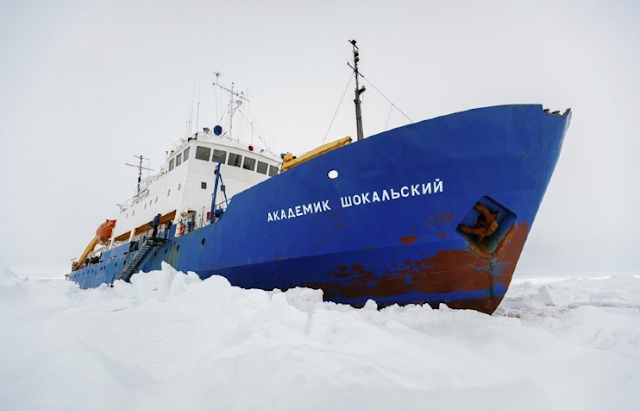 When the Russian ship MV Akademik Shokalskiy was caught in thick ice between Australia and Antarctica just after Christmas 2013, its crew and owners were dismayed, but among climate deniers it evoked a definite sense of Schadenfreude. The expansion of sea ice that caused this mishap was taken as evidence that the planet could not be warming. If the planet is getting warmer, they asked, how could a cold place have more ice than ever?

Decades ago, geographers and other planetary scientists realized that the overall warming caused by increasing concentrations of heat-trapping greenhouse gases would have complicated results. Just as cake batter that heats too rapidly will not cook evenly, so too would a complicated system of fluids (air and water) at the earth's surface behave somewhat chaotically when experiencing unprecedented rates of change in temperature. For this reason, "global warming" gave way to "climate change" or even "climate disruption" as descriptive terms.

Since we are living through the first and only "experiment" of its kind, we cannot know all of the implications of unprecedented increases in carbon dioxide (increased nearly 50 percent in just two centuries), methane, and other gases. This is precisely why scientists and activists have urged caution -- alas, to little avail.

The area of ice cover in the Southern Ocean  continues to expand, though little is known about the ice volume, and the causes of the expansion are not yet fully understood. Among climate skeptics, this expansion of ice-covered surface is far more interesting that then disappearance of ice at the opposite pole, even though that loss is THREE TIMES GREATER than the gains in the south.

The expanding ice is important. It reflects solar energy, which will slow -- however infinitesimally -- the overall warming of the planet. But it does not negate the evidence of climate change provided by droughts, floods, wildfires, coral bleaching, and sea-level rise elsewhere on the planet..

NASA scientists provide a brief explanation of the see-saw phenomenon between the two roofs of the world in this video, as well as two more extensive discussions of the current state of our understanding of Antarctic ice here and here.

In college I majored in geography, but in high school I lettered in math. So I decided to put this phenomenon in some perspective, mathwise.

This is to say that at 7,780,000 square kilometers, the greatest-ever extent of Antarctic sea ice (defined conservatively as ocean areas with 15% or more ice cover) covered about 1.5 percent of the earth's surface, about 2.5 percent of all the earth's ocean surface, and just over 1/3 of the Southern Ocean -- that narrow band of ocean poleward of 60 degrees south latitude.

The annual ice gain is one half of one one-hundredth of a percent of the world's oceans, and about one-third of the amount of ice surface lost annually in the Arctic. It is not trivial -- it is an area larger than Connecticut -- but it hardly means we can quit worrying about the other 99+ percent of the planet.


Posted by James Hayes-Bohanan at 5:05 PM