I have the great privilege of counting some of the world's best coffee farmers among my friends. I also know of coffee retailers who do their best -- through certified fair trade or other models -- to connect customers to producers in ways that enhance the social and environmental sustainability of production.

But after more than two decades of growing attention to specialty coffee, fair trade, and other forms of innovation for sustainability, all of these efforts continue to reside in niche markets -- even boutique markets. The vast majority of customers do not know anything about where their coffee comes from, and seem to prefer not knowing. "Cheaper than a cup of coffee" remains a byword in fundraising, to signify amounts of money too small to notice -- despite the tens of billions of dollars spent on coffee each year, and the millions of people who depend on their miniscule shares of those dollars. 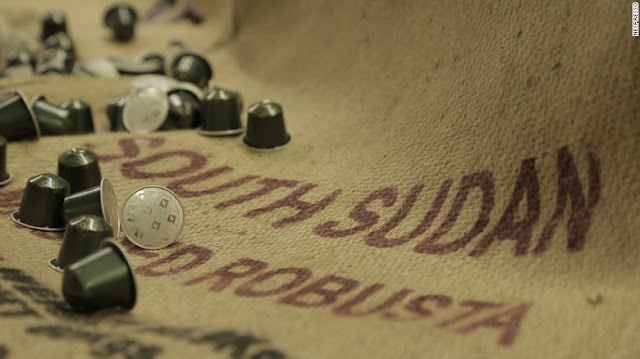 As I have been thinking about my coffee seminars in the spring 2016 semester -- the tenth year of these seminars -- I have been considering an assignment that would directly address the question of mainstreaming coffee justice.

That is, I have been hoping that at least some of the student research in the course could be devoted to options for improving the lives of coffee farmers who will, realistically, never be part of the elite ranks of specialty producers. Coffee is an industry that provides only modest rewards to those at the very top of the quality scale, and essentially no rewards to everyone else. The latter part of this equation must change.

Here is where George Clooney enters the conversation. Yes, George Clooney, nephew of Rosemary. Two aspects of his off-screen work have been overlapping of late, with interesting results. He is a celebrity face for Nespresso, the coffee-pod branch of Nestle -- about as mainstream and far from quality as one can get in coffee. He has also been politically active in South Sudan. The result has been a nascent attempt to develop coffee production in the world's newest country, and to get Nescafe to think about the (obvious?) connection between sustaining coffee producers and sustaining coffee production.

So far, the corporations involved in Clooney's efforts seem to be discovering problems that those of us who study coffee communities have long known, and the remedies they are beginning are inadequate. But their recognition -- however belated -- of the crucial role of farmer viability in their businessses may provide a vital opening for bringing some modicum of justice to mainstream coffee.

Environmental concerns around coffee have centered on organic, shade-grown, and bird-friendly coffee. These practices tend to require a lot of additional work on the part of the farmers growing the coffee, and they command premiums from concerned buyers, myself included. Somehow the dollar-per-pound premium at retail translates to pennies or a dime at the farm gate, even in fair-trade models, but at least the farming communities get the benefit of cleaner air and water, and less exposure to chemicals in the field.

Just as important as the potential threats to the environment posed by conventional coffee-growing methods are the environmental threats to coffee production, particularly from climate change. The best coffee -- like the best wine -- depends on delicate and rare combinations of cloud-forest microclimate and volcanic soils. A skilled farmer can work with these to coax amazing flavors from a plant whose fruit would be unremarkable in a different location.

The farmers I know who work in such locations have been worrying almost constantly about climate disruptions for a decade or more, but most conventional farmers have until now been relatively unaffected. Mainstream coffee has not been as vulnerable to climate change as the rare specialty coffees are, but that is about to change, according to a new study by World Coffee Research.
The forecast decreases in suitable coffee lands pose an existential threat not just to the elite segments of coffee, but to coffee in general. Sadly, this may be what finally motivates some folks to get serious about climate change.

Posted by James Hayes-Bohanan at 7:10 AM