From the excellent program The World, I learned that Chennai -- the fourth-largest city in India -- is experiencing a flooding disaster comparable to Katrina right now.


The BBC reports on rescue efforts as a week of continuous rain was followed by the most intense rains in more than a century in this southern city also known as Madras. Elsewhere on BBC, activist Nityanand Jayaraman blames the severity of the damage on unregulated development and poor infrastructure planning. It is true that the vulnerability of the world's poor to climate extremes is made worse by lack of resilience. It is also true that no city in the world would be prepared to receive a half-meter (18 inches!) of rainfall in a single day, as Chennai did this week.

From a Climate Justice perspective, this is a case of the very uneven geography of climate-change consequences. But increasingly intricate global economic connections mean that the Core "suffers" along with the periphery, as Paddy Padmanabhan explains eloquently on Quartz. I use quotes around the word "suffers" because the inconvenience to customers and financial losses to shareholders are trivial in comparison to the lives and households currently being swept away. Some may remember the supply-chain interruptions Padmanabhan cites from earlier floods. 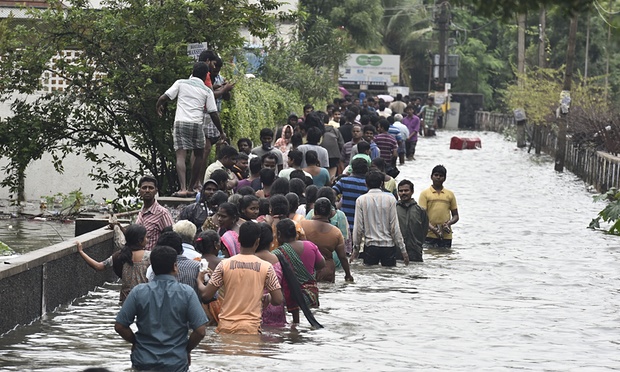 A fascinating aspect of 21st-century disaster is the role of social media in recovery and reporting, even in places with extremely low incomes and poor infrastructure. Smart phones proliferate in many surprising places, to the extent that the British newspaper The Guardian is able to solicit first-hand reports directly from the scene of the disaster.


Posted by James Hayes-Bohanan at 9:44 AM