The beautiful coastal town of Olinda (literally, "Oh, Beautiful") was among the earliest Portuguese settlements in Brazil and retains some of the best-preserved streetscapes from the earliest colonial period. My family enjoyed a brief visit in 2000, during a week-long stay in the nearby city of Recife.


Like all Brazilian cities -- NOT just Rio -- it was home this week to Carnival festivities, as millions enjoyed a "Fat Tuesday" before the discipline of Lent. (Although other Christian sects are gaining traction in Brazil and not all Brazilian Catholics adhere strictly to the faith, it retains the world's largest population of people identifying as Catholic, and this celebration remains among the most important traditions in Brazil.) One distinction of the celebrations in Olinda is the inclusion of giant puppets with all kinds of themes, both traditional and trendy. This year saw puppets representing David Bowie, for example, and Star Wars characters.

Most fascinating, though, were the puppets representing a specific, middle-aged police officer: Newton Ishii.
Catherine Osborn tells the story of Officer Ishii in a three-minute interview that reveals much about Brazil's unique ability to combine humor and outrage, and to use employ the arts in political protest and resistance.

After listening to the audio, it is worth reading more of the background that puts the story into context and explain why those wishing to see this most celebrated police officer will need to be satisfied with the masks now for sale -- he is on desk duty. You can also watch the music video that brings to life Brazil's schadenfreude over the arrests of its most aloof criminals.

All of this fun, of course, belies environmental, political, and financial woes that are profoundly bothersome for Brazil and Brazilians. In fact, the fun is simply a way to show that the misdeeds of Brazil's political and economic elites will not be allowed to define the rest of them. As Osborn's reporting tells us, this winking dissent really emerged in the culture during the dictatorship, which lasted from 1964 to 1985, and had its darkest days -- with U.S. support -- from 1967 to 1975. As I have explained, the haunting song "Calice" appeared to be about the prayers of Jesus in Gethsemane but was actually an indictment of the dictatorship and by extension of our role in supporting it.

Those interested in Brazil might want to catch 500 years of its geographic history in the next few seconds. 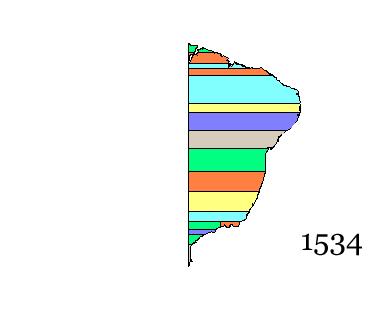 Posted by James Hayes-Bohanan at 12:18 PM