In the United States, presidential politics are heating up just as temperatures are dropping and snows are falling. It has led to more than a few joking references about "socialist snowplows," because of course the clearing of public roads is (for now, anyway) funded by public money.

What would genuinely socialist snow removal look like, though? As it turns out: amazing.

Boston-based Jason Margolis investigates snow removal in famously socialist -- and prosperous -- Stockholm, Sweden for his PRI report Snow on the road in Sweden -- no problem. If this story does not wipe the "American exceptionalism" smirk off our collective face, nothing will.

Stockholm is among Europe's snowiest cities (and holds a number of other high rankings for uncomfortable weather). Yet, the snow experience for the average commuter is much like mine was when I lived in Tucson: it is literally never a problem. 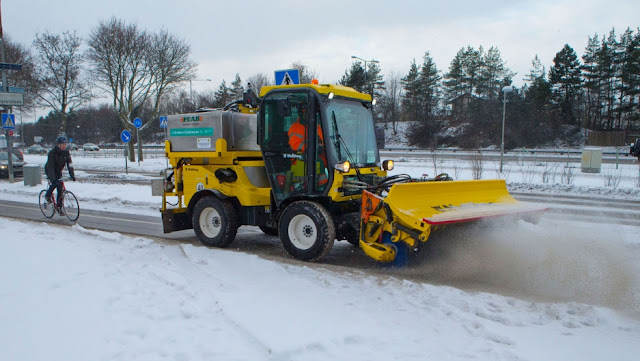 In fact, the Stockholm snow experience is better than my Tucson experience, because it is easier to get to work on a snowy day in Stockholm than it is on a sunny day in Tucson. Listen to the story if you have any doubt about this, or if you want to know how it is possible.

Or you can start with my summary. Stockholm succeeds in snow removal for a few basic reasons:


Anybody who lived in Greater Boston in February 2015 knows point number 1. As our political season moves forward, we will learn how many -- in Boston and nationwide -- understand #2 and #3.

I took a special interest in this story, because I plowed snow for two years in the mid-1980s, with my own plow during the second year. Although I saw plenty of "socialist" plows in action, our work was almost entirely on private property. We, in fact, were able to make our money becasue the public-sector workers had cleared the paths between our commercial contracts. Like anybody who is "self-made" in the private sector, we were clearly dependent on public-sector workers.
Lagniappe 2 (June 2018)

The plow in the image above is leading a bicycle, so I was reminded of this post when I saw the following video from Copenhagen just now.
Imagine if the United States invested in bicycle infrastructure like we do automobile infrastructure. We'd all be a bit healthier.


Posted by James Hayes-Bohanan at 8:07 AM