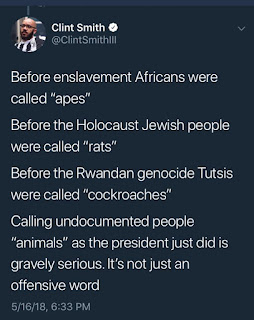 This week, the president of the United States justified his calls for even tougher action on immigration by referring to those who cross illegally into the United States as "animals" and worse. With the recent appointment of an acknowledged torturer to one government agency (CIA) and the announcement of familial torture as a deterrent by another (ICE), the words could not be taken lightly.

Within a day, his administration was partially walking back the comment, insisting that it applied only to the Salvadoran-American gang MS-13. This is part of a broader strategy, of course, of using a small number of admittedly odious migrants as rhetorical cover for deporting dishwashers, shopkeepers, and thousands of other ordinary undocumented Americans.

In this case, though, the rhetoric is different not only in degree, but in kind. It is not acceptable talk for a person occupying an office that was once called "leader of the free world" in a country whose national anthem still claims to celebrate "the land of the free and the home of the brave."

Journalist Tanzina Vega discussed the precedents and dangers of this rhetorical shift with philosopher and author David Livingstone Smith on today's edition of The Takeaway. Smith is author of Less Than Human: Why We Demean, Enslave, and Exterminate Others.

The MS-13 gang originated in Los Angeles in the 1980s. Its history is intertwined with U.S. policies in the northern triangle region of Central America during that period.

Posted by James Hayes-Bohanan at 6:15 PM