I first became aware of the country of Cape Verde some time during my college-level study of geography. Throughout my studies -- including two graduate programs -- I would occasionally notice it on a map or in an article, and I always had difficulty figuring out its exact location.


Part of my confusion arises from the name -- whether pronounced Cabo Verde, Cabo Verd, Cape Verd, or Cape Verde, the implication is some kind of peninsula or point of land, a cape. It is neither a cape nor is most of it green. 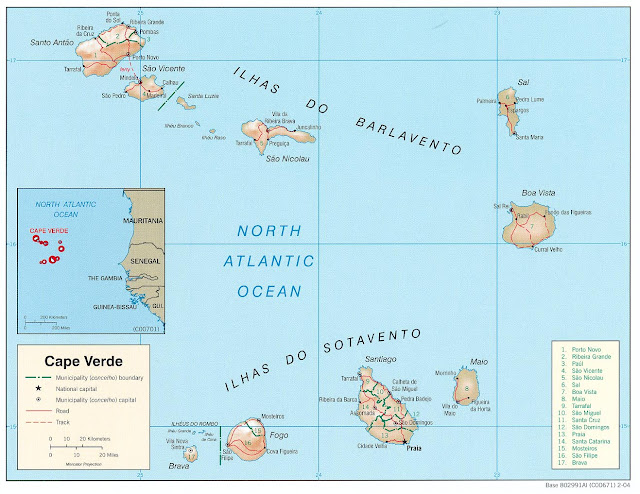 Its existence as a country was also somewhat unclear, as cartographers were slow to note its 1975 independence from Portugal. Others showed it as including both the Cape Verde Islands and a point of land several hundred miles to the east, in what is now Senegal. That is the cape, apparently, from which the name originally derived. One explanation I heard was the they were the islands west of that cape. Cartographic confusion has continued at least as late as 2013, when I tried in vain to alert Google Maps to labeling errors within the country.

My education about the geography of Cabo Verde (now its official name in any language) began shortly after moving to southeastern Massachusetts in 1997. Many of the students and employees of my college (now university) are Cape Verdeans, whether they be first, second, or up to fifth generation.

The connection between Cape Verde and this area is a great example of chain migration: people tend to move to places where they already have some connection. Connections that began with whale hunting continued as workers were needed in shoe manufacturing, cranberry harvesting, or other industries. They continue today, not for any single industry, but because of a whole series of connections, many related to education. I remember asking a first-generation student when she had moved to the United States, and she replied that she came at age 13 specifically to attend Brockton High School.

I was fortunate enough to see the commitment to education first-hand when I made my first visit to Cabo Verde in 2006 with a group of students, alumni and employees. From high school students through the president of the country, we found many people with a great reverence for teachers and the value of learning -- sentiments we could use a bit more of in my country.

All of this is by way of prelude to a nice introduction I found recently by Barby, an online educator who narrates Geography Now. (Note: the Portuguese archipelago of Madeira is mispronounced and misspelled in the video. Barby makes up for this by correctly identifying Macaronesia, which I have mistakenly been calling Macronesia.)

With this video as an introduction, the Wikipedia History of Cape Verde provides a bit more depth.


Historian Richard Lobban describes Cape Verde as the westernmost part of Africa and the southernmost part of Europe, as Barby does in the video, and he also calls it the easternmost part of the Americas. Cape Verde played an indirect role in the definition of Latin America itself, as the Treaty of Tordesillas defined the Spanish/Portuguese line of demarcation as a distance west of the islands.

The connections that led him to this conclusion certainly include music.

I first started learning about the music of Cabo Verde the first time I taught the geography of Latin America, in which I play a lot of music from that region. A student in the class suggested I would enjoy the music of Cesária Évora because of some similarities he noticed, and he was correct. Revered by any Cape Verdean I have met, she was still performing in Boston in those days, until her death in 2011.

I describe my 2006 visit as my "first" rather than my only because I hope to return to Cabo Verde in the future. I have recently become more involved with the BSU Pedro Pires Institute for Cape Verdean Studies, and my lovely wife Pamela and I have been taking classes in Cape Verdean Creole (Kriuliu) with its director.

Posted by James Hayes-Bohanan at 1:54 PM