When, as I often do, I have students gathered in front of the Africa side of our EarthView globe, I ask them to repeat the phrase, "Africa is not a country!" For a brief time during the month when I was born, however, it was a possibility under serious discussion.

I learned this from BBC Witness, a nine-minute radio program that followers of this blog will recognize as one that has become a favorite of mine. It was through the author John McPhee that I developed an appreciation for biography as a great way to learn geography and history, and Witness gives me such lessons in a small doses. The whole series is available online, but I often plan my morning coffee routine around its local airing on 90.9 WBUR. I have to get the hand grinding done before 4:50 so that I can hear the whole program.

The most recent episode to capture my attention was a rebroadcast that I actually heard in my car, as I drove to early-morning rowing. (My dog, my wife, coffee, and rowing have made me a morning person, though blogging keeps me an evening person as well.)

Africa United is an interview with the Eritrean scholar Bereket Habte Selassie, who now teaches at the University of North Carolina-Chapel Hill, but who was present at the first continent-wide gathering of African leaders. Following successful independence movements throughout the continent, leaders of 32 countries gathered to discuss options for a common way forward. Although some advocated strongly for a federation similar to the United States, the final outcome was to create the Organisation of African Unity. 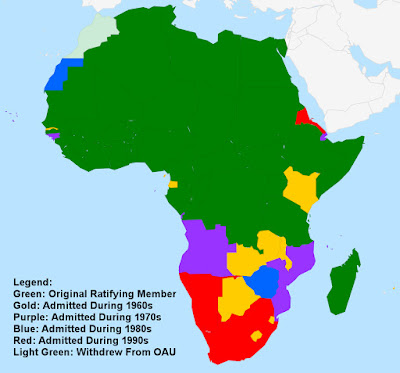 The organization grew over the next several decades until it was replaced by the African Union in 2002.

Posted by James Hayes-Bohanan at 10:55 AM