One of the first things I ever posted on the web was an article about lyophilisation, better known as freeze-drying. It was for the Wornick Company, my employer at the time and one of the pioneers in the process. Even though we no longer produced freeze-dried products, they were part of our history and I was involved in some very nerdy financial machinations about freeze-dried fruit. I even took a bunch of the product with me on my first trip to the Amazon.

So I know something about freeze-drying, and about what it is good for.

To the ever-growing list of things I have learned from my wonderful alumni, we can add this: I just learned freeze-dried corn meal is a thing, that I have probably had it, and that it is not good.
In The Tortilla Cartel, journalist Elizabeth Dunn describes the strange story of Maseca. This powder gives home cooks and even some restaurants the idea that they are making tortillas (or tamales, as I have done) from scratch, when in fact they are simply reconstituting the dough. She makes a comparison to instant Folger's coffee which, like NESCAFÉ, no es café. Just as these concoctions are not really coffee, Maseca is not really cornmeal.

I thought I had no illusions about industrial-scale cornmeal, but I was wrong. What is in those boxes and bags looks like cornmeal, but it really is not. I am now even more grateful that the traditional method does still exist in some places, and that one of those places is the home of the host family I visit every January in Nicaragua. Doña Elsa enjoys teaching my students and me how to form and cook tortillas, which she does by the dozen every morning without any utensils. Just as described in Dunn's article, she is using corn grown on her own property and ground in a communal stone mill at a neighboring house. This imparts one thing that Dunn's article does not mention: minerals from the grinding stones, now missing from the diets of millions in Latin America.

Because corn is essential to the agriculture and foodways of Latin America and because commodity corn has been such a problem in both the United States and Latin America, this blog includes quite a few additional posts, which readers of Dunn's article might find interesting.  These include The True Cost of Farm Subsidies (2010), Elevating Profits (2014),  Seed Saving (2017), and Rey de Maíz (2017).

All of these articles point to something I find missing from almost all discussions of genetically-modified organisms (GMOs), which tend to focus on food safety. As important as that is, the biggest threat posed by GMOs is that they accelerate the narrowing of the genetic diversity of our food supply.

Fortunately, Dunn's article points to some efforts to recover some of the diversity of maize. Unfortunately, for those who are not going to grow and process corn at home, the alternatives are so far limited to high-end grocery stores. Perhaps a way can be found to get real cornmeal back into neighborhood bodegas and restaurants.


Two days after I posted the foregoing, I had three personal encounters with maize. First, I had the honor of husking the corn for a family gathering. Second, my good friend Alfredo -- and the son of the tortilla expert mentioned above -- sent me photos of corn his family had just planted. (In the photo above, I am wearing a coffee necklace made for me by that very same young man.) 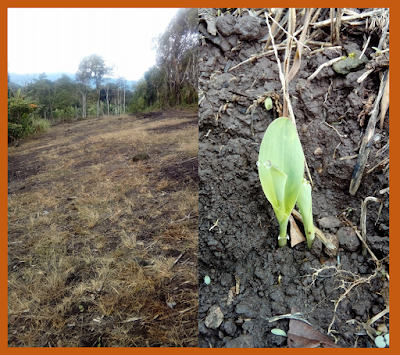 Third, my modest abilities in Spanish gave me the opportunity to chat with a man from El Salvador, who told me that he grew up farming both corn and coffee. It was a reminder that coffee in Central America is part of an agricultural landscape that includes basic grains that were being cultivated for many centuries before its arrival. 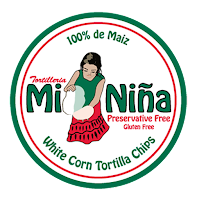 Not exactly news, but rather a connection I have only today made. Readers in New England can find real chips from Mi Nińa Tortilla in Newton, Massachusetts.

The company has been making Aztec-style tortillas from real corn since 2011. I just enjoyed some of these chips with guacamole from a brand new local company.

Posted by James Hayes-Bohanan at 10:52 AM