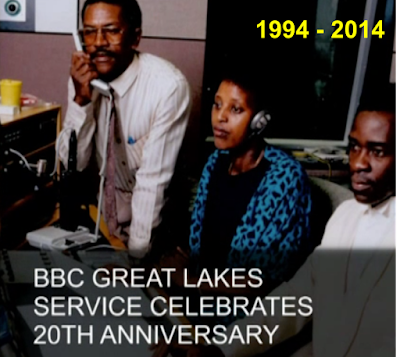 Just yesterday,  I learned about a special service of the BBC, known as BBC Great Lakes. It was established in 1994 by BBC journalists seeking to help reunite families in the aftermath of the genocide in Rwanda. It continues to broadcast in the Kinyarwanda and Kirundi languages. Its online presence includes the newsy BBC Gahuza page,  as well as social media channels.

Perhaps not surprisingly, it was from PRI's The World that I learned about this news service, in a piece entitled Memories of growing up in Bujumbura, in which producer Robert Misigaro reflects on the importance of a youth center in his home city, the capital of Burundi and shares music from that city.

The Great Lakes region of Africa is not merely a BBC construction; the term is sometimes used narrowly to refer to the are bordering Lakes Victoria and Lake Tanganyika.

More broadly, it refers to the 12 member countries of the International Conference on the Great Lakes Region, which was established by the United Nations Security Council in 2000, as the international community formally recognized the importance of cooperation on the many cross-border conflicts in this part of Africa. Scholar Patrick Kanyangara examines the background and current dynamics in his 2016 article Conflict in the Great Lakes Region.

Posted by James Hayes-Bohanan at 10:14 AM