Sometimes a large city can give a person a feeling of profound anonymity. I felt it the first time I flew over São Paulo -- among the millions there, I envisioned myself as nameless. But what if the city itself had no name? 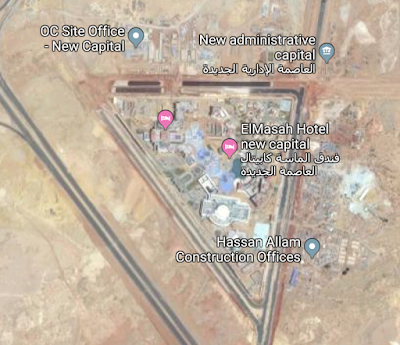 I will be interesting to compare this July 2018 screenshot with the imagery of Egypt's new capital as it continues to be built out.

Even now it is a bit difficult to see what is emerging in the Saharan sands some 30 miles to the east of Cairo (and not to be confused with New Cairo City, about halfway between the two).

Journalist Jane Arraf told the story of Egypt's new capital, as officials decide that relief from congestion and pollution in centuries-old Cairo cannot be provided otherwise. Wikipedia simply calls the emerging city Proposed new capital of Egypt in its description of the details of its establishment.

Unlike the original Cairo -- whose origins are in the murky recesses of time -- this ex nihilo city was not even a proposal until 2015, deep in the social-media age. So it will the best-documented national capital ever, with both scholars and selfie-sticks capturing its every achievement and growing pain. It will be interesting to compare this master-planned capital with others, such as my home town of Washington, D.C. and the swimming-pool mecca of Brasília.

I have not yet seen any indication of how the name of the new city will be selected, but a fellow geography professor has already suggested what is obviously the best choice: Triangle McTriangleface.

Posted by James Hayes-Bohanan at 1:30 PM